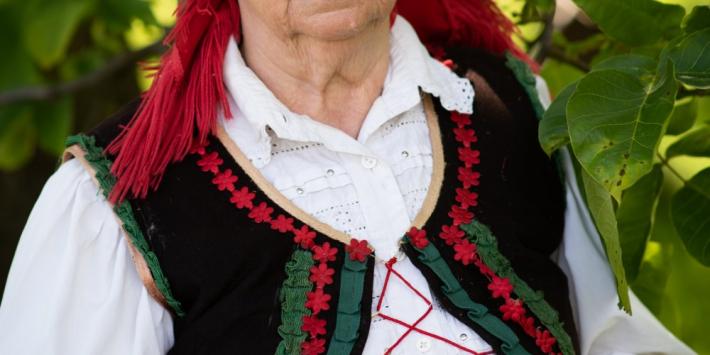 Helena Kołodziej was born on 8 May 1936 in the village of Wielkie near Abramów into a farmer’s family. She now lives in nearby Wielkolas. She completed 6 grades of primary school before being permanently expelled in seventh grade for her protest against removal of crosses from classrooms. It was not until her adult life that she graduated from the Folk High School in Gardzienice. Kołodziej has worked on the farm all her life. In 1979, she founded the Farmer’s Club (Klub Rolnika) in Wielkolas, and she has also headed the local Village Women’s Club and started the vocal and theatre ensemble ‘Wielkolasianka’, for which she directed a number of dramatised productions, e.g. Wieczór wigilijny (Christmas Eve Night), Gaik (Little Grove) and Kusaki (a carnival show).

Helena Kołodziej’s artistic legacy is multi-faceted: it comprises works of literature, folk art and folklore. Her poetry features the cult of ‘local homeland’ – a person’s immediate environment: place of birth and daily existence. It includes agrarian motifs, in which working in the field is treated in a metaphysical dimension and viewed in the context of eternal salvation. There are images of fertile soil portrayed as an ancient provider of food, while seasonal representations are dominated by the spring, when nature takes on Arcadian and sacred qualities. Her family poems are deeply poignant in their evocation of maternal love. While her personal poems are infused with sentimental reflections, her religious works are imbued in prayerful and hymnal tones, striking for their pious devotion. Some of them include Marian motifs and several contain references to John Paul II. On the other hand, the author does not shy away from satirical and occasional texts, some of which has been used, by her immediate circle of friends and family, as song lyrics.

Helena Kołodziej owes much to her mother, who taught her the techniques and designs of traditional works of plastic art, both ritual and decorative, which she creatively developed and perfected. The motifs found in her handicrafts include Christmas stars and cribs, Christmas tree decorations, Easter eggs, spiders, rods, wedding garlands, harvest festival wreaths, paper-cuts and tissue paper flowers. She also makes characteristic and recognisable works made of straw: figurines, baskets, hats and toys. She has appeared at the Folk Art Fair (Targi Sztuki Ludowej) in Kazimierz Dolny nad Wisłą, the Jagiellonian Fair (Jarmark Jagielloński) in Lublin and similar events held in Warsaw, Kraków and Toruń. She has represented Lubelszczyzna (Lublin Land) at Expo 2000in Hanover and at folklore presentations in Düsseldorf, Kiel and Magdeburg. Kołodziej collaborates with kindergartens, schools and with the Galeria STL (Association of Folk Artists’ Gallery) in Lublin, where she familiarises the children and adolescents with folk culture and teaches the artistic skills she is so well-versed in.

Worth mentioning is also the artist’s ethnographic passion: she loves recording folk beliefs, customs, habits and rituals, jotting down songs and tunes, recreating Christmas and carnival theatrical shows (such as jasełka and herody) and writing scripts for ritual performances.