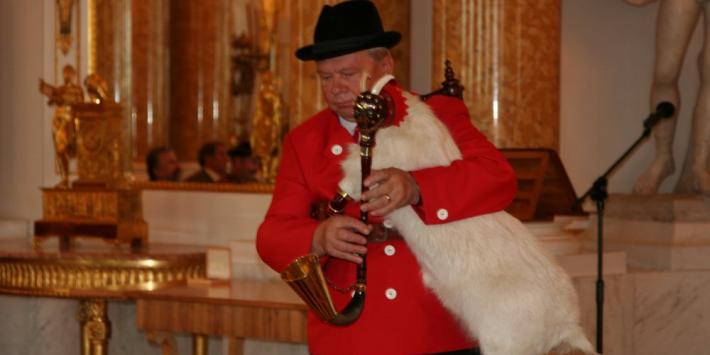 Henryk Skotarczyk is an instrumentalist, folklorist, instrument maker, and promoter of bagpipe music. He was born into a musically inclined family in Zbąszyń in 1934. His grandfather played clarinet, and his sister and uncle were among the founders of the band Wesele Przyprostyńskie (Przyprostynia’s Wedding).

He began his musical education in 1947 with Antoni Janiszewski. From 1950, he continued his training at the Music Centre in Zbąszyń, which he had established. He was one of the first students of Tomasz Śliwa from Chrośnica, the bagpipe teacher of the folk instruments class. In 1954, as one of its first students, he graduated from the State Music Centre, and in 1957 he undertook further degree studies at the St. Moniuszko National School of Music in Zbąszyń.

In 1951, he performed at the Festival of Polish Music in Warsaw. From 1952, he played the wedding bagpipe in an excellent band alongside the fiddler Jerzy Stiller and clarinettist Bernard Andrys. Together, they have popularized and performed bagpipe music at many festivals and folk reviews in Poland and abroad, receiving many awards. They played at the Central Harvest Festival in Szczecin. Skotarczak’s special musical achievement was his participation at the International Folk Music Festival in Llangollen (Wales) in 1959, where his band received third prize in the instrumentalists category.

From 1968 to 1975 the artist worked as a teacher in the folk instruments class at the National School of Music in Zbąszyń, and from 1969 to 1973 he taught at the Music Centre in Babimost. From 1978, he taught a class on folk instruments in Zbąszyń, and from 2000, he ran a musical education course in primary and secondary schools in Babimost, Nowy Kramsk and Podmokle Małe. Skotarczak’s students actively participate in regional cultural events, take part in festivals and reviews, and win awards at competitions. Five of his sons graduated from the folk class of Zbąszyń music school, and one of them also became a teacher of folk instruments playing.

Skotarczak is an expert on folk instruments and a respected maker of instruments (bagpipes and sierszenki - a primitive form of practice bagpipes), many of which are now in museum collections. In 2005, one of the bagpipes he made was awarded at the National Bagpipe Confrontations in Poznań.

In 1959, the artist was one of the founders, and in the following years, he became the secretary and president of the Association of Folk Musicians in Zbąszyń, whose main goal is to teach and master techniques of playing folk instruments, pass on the secrets of making wedding bagpipes, ceremonial marriage bagpipes and sierszenki, as well as to popularise the folklore of the Zbąszyńsko-Lubuski region and co-organize folk events, such as Biesiady Koźlarskie/Bagpipe Evenings.

Skotarczyk is a respected figure in the local community, which organized a jubilee celebration for the 55th anniversary of his artistic, pedagogical and social career. For his lifetime achievements he received the Medal of Honour for merits in developing Zielona Góra Voivodeship (1980), the Director of the Department of Culture and the Arts in Regional Office in Zielona Góra Award (1982), the Kasper Miaskowski Medal (1999), the Artistic Education Centre in Warsaw Award (2004), and the Medal of Honour for his contribution to Zielona Góra Voivodeship (2004).