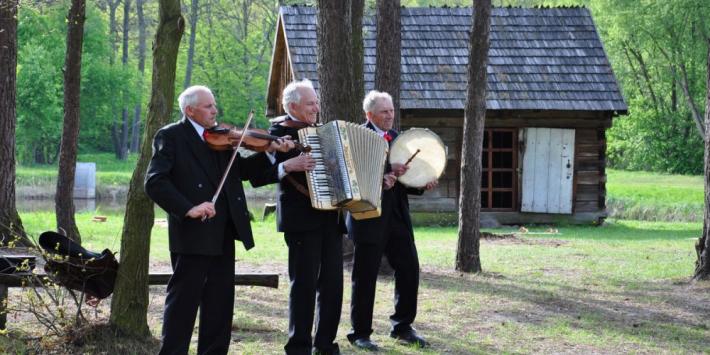 Three brothers  – Józef, Stanisław and Adam Tarnowski – form one of the best bands of the Radom region. Together, they have performed at more than 500 weddings. In 2011, they received the Oskar Kolberg Award.

Born in Domaniów (Przytyk municipality), they are the sons of the talented singer Marianna, nee Mika, and the fiddler Antoni from Marysin, a former student of Antoni Chydziński. The family's musical traditions go back to the brothers’ maternal great-grandfather. Endowed with an innate musical talent, passed on from generation to generation, the brothers felt a "compulsion to play" and, like their ancestors, they have held the position of village musicians.

The eldest son Józef (b. 1933) made a living from running a farm and is the band’s drummer.  Stanisław (b. 1940) currently lives in Radom. He trained as a bricklayer, but he abandoned state jobs in the 90s in order to establish his own construction company. He began his musical adventure by playing the fiddle, which he swapped for a three-row accordion in the following years. The youngest of the brothers, Adam (b. 1945), lives in the Janiszew village, near Radom. He graduated from agricultural college. Prior to following his brother in establishing his own bricklaying company, he worked as a bricklayer and a plasterer, as well as a car mechanic. He mastered the fiddle, an instrument which he still plays at weddings today as quickly as he did at the age of thirteen.

Initially, the brothers formed two separate bands with a line-up consisting of Stanisław Tarnowski (fiddle), Marian Lipiec and later Tadeusz Lipiec (accordion) as well as Adam Tarnowski (fiddle), Piotr Oparczyk (accordion). In 1967, the musicians from Domaniów decided to establish a joint band. Stanisław abandoned the fiddle in favour of the three row accordion, and a year later, the Tarnowski Brothers Band debuted as a trio at the wedding of Genowefa Żebrak from Wir and Adam Gębka from Rdzuchów. This event was the beginning of the band’s existence. In 1975 they started to expand their instrumental ensemble with saxophone and trumpet, which were fashionable during that period. Depending on the budget of their host, they performed with saxophonists Stefan Gołąbek and Tadeusz Dąbrowski, and later on with trumpeters Jan Pasik, Bogdan Przyrocki and Bogdan Gajda, who interchangeably played the guitar. In the late 80s and early 90s, Bogdan Gajda was occasionally replaced by guitarist Andrzej Kwiatkowski. The Tarnowski brothers say they play "everything".

Their repertoire includes mazurkas, obereks, polkas, kujawiaks, marches, waltzes, foxtrots, tangos, rumbas, and szlofoks (named after the slowfox) learned from well-known local musicians. They had to learn by themselves "where and how to press the strings". And they recall that their uncle, who didn’t want them to follow in the footsteps of the family’s fiddlers, limited himself to playing only particular melodies.

From 1991 to 1994, Stanisław and Adam Tarnowski took on seasonal work in Germany, which forced the band to stop playing. After returning home, they had to a face new reality in which disco-polo reigned over wedding receptions. Weddings at which they could play their "ancient" music were very rare. Therefore, they played mainly for themselves and their families. It was only in 2004 that they were “rediscovered” and persuaded to play for a wider audience by Andrzej Bieńkowski, a painter, ethnographer, and professor at the Academy of Fine Arts in Warsaw. The Tarnowski brothers reactivated the band and began to actively participate in all kinds of folk festivals.

From 1991 to 1994, Stanisław and Adam Tarnowski took on seasonal work in Germany, which forced the band to stop playing. After returning home, they had to aface new reality in which disco-polo reigned over wedding receptions. Weddings at which they could play their "ancient" music were very rare. Therefore, they played mainly for themselves and their families. It was only in 2004 that they were “rediscovered” and persuaded to play for a wider audience by Andrzej Bieńkowski, a painter, ethnographer, and professor at the Academy of Fine Arts in Warsaw. The Tarnowski brothers reactivated the band and began to actively participate in all kinds of folk festivals.

The first contest they participated in was Stanisław Stępniak Meetings with Folklore in Wieniawa, where they received third prize. In subsequent years they won a number of awards and distinctions at the reviews of folk bands in Iłża, Zakrzew, Przysucha, Wiśniew and Pawłowo. Their crowning achievement was first prize at the festival in Kazimierz Dolny in the bands category (2008), first prize at the 6th Instrumentalists Muzykanty Review of Bands and Folk Soloists in Końskie (2010), and a special mention at the "Na Styku Ziemi Łódzkiej Mazowsza i Małopolski / At the Junction of the Mazovia and the Łódź Little Poland region" First Folklore Festival in Opoczno (2010).

The Tarnowski Brothers Band is also known for its humorous genre scenes usually performed on the second day of a wedding. Their flair for acting in conjunction with an innate sense of humour made them excel in these performances. The shows under their direction were as appreciated as their music played for dancing. The band performed the “wedding theatre" during the 3rd Innowica Theatre Meetings in Nowica (2010) and at the Music of the Village festival at the Museum of Radom Village in 2011.

The band also participates in various projects which aim to pass on Polish musical traditions to younger generations. They took part in the Muzyka Źródeł. Spotkanie Pokoleń/ Roots Music – Meeting of Generations (Radom, 2008), which resulted in an album recorded by the workshop's participants as well as in the Wszystkie Mazurki Świata / All Mazurkas of the World Festival (Warsaw, 2010), resulting in a video recording.

The Tarnowski brothers taught their repertoire of folk music to their talented children. However, only Józef’s son Jan and his grandson Łukasz included these traditional rural songs in their wedding band’s repertoire. The sons of Stanisław and Adam – Waldemar and Tomasz respectively – play contemporary melodies in their band.