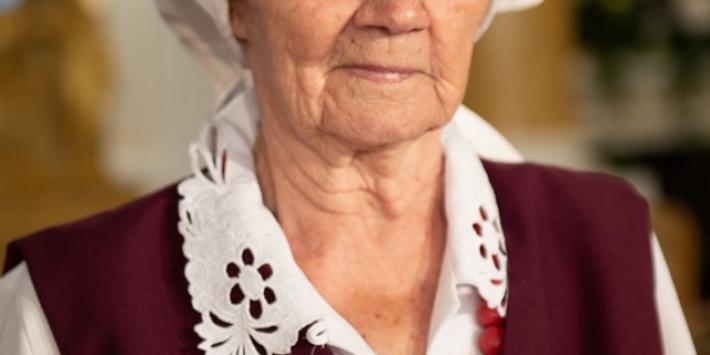 Anna Andruszkiewicz from Wiżajny (born in 1923) has for the last few dozen years been the most distinguished Polish folk singer living on the border between north Suwalszczyzna (the area around the city of Suwałki) and the Lithuanian region of Suduva. She can boast a very rich local repertoire, which she performs solo or in a local contrapuntal duo (accompanied by another singer), whose singing practice resembles that of the ensemble Pogranicze from Szypliszki. She inherited this repertoire, as well as the manner of performance, from her mother and grandmother, but she also spent a few dozen years collecting it (during bike trips) on a tape recorder from the best local singers born before the First World War. She revived this often archaic repertoire (narrow-range scales, ametrical songs and ballads etc.) with a real feel for musical and literary content.

The repertoire she performs has been recorded by ethnomusicologists, headed by Prof. Jan Stęszewski and Prof. Bogusław Linette, from the Adam Mickiewicz University in Poznań during their field trip in 1988 (the recordings are now kept in the archive of the Institute of Musicology) and by the employees of the Radiowe Centrum Kultury Ludowej (Folk Culture Radio Centre), especially during about a dozen appearances of Anna Andruszkiewicz and her pupils at the successive editions of the Kazimierz nad Wisłą festival (starting from 1986).

Despite her own modest formal general education (apart from working as a farmer, she was for many years employed at the local maternity ward), she has spent, as a volunteer, a few dozen years teaching folk songs to children from Wiżajny and the neighbouring villages. She has taught solo repertory and spent 25 years with the local folk song ensemble Młode Jezioranki, with whom she also recreated the local traditions of annual rituals. Her contribution to the revival of the local song tradition in Wiżajny is simply unmatched.

Performing with young artists from the commune of Wiżajny, Andruszkiewicz has won a dozen prizes and honourable mentions (including the individual ‘Champion’ prize) in the ‘Big-Small’ category at the Kazimierz festivals. Several dozen recordings of her local folk songs are kept in the archive of Polish Radio’s Folk Culture Radio Centre (recorded during the successive festival editions and at her home).

Her achievements in popularising local folk music have been the topic of numerous BA and MA dissertations.

Her recorded performances are available in multiple sources, e.g. in the ‘Origins of Music’ series published by the Folk Culture Radio Centre, CD 9, Suwalszczyzna and Podlasie: the ballad Zaszumiała w sadeńku traweńka and the pre-wedding song Ej pohulaj jeleniu. Her repertoire contains more than 150 local folk songs in total.

She has received four individual awards at the National Festival of Folk Bands and Singers (Ogólnopolski Festiwal Kapel i Śpiewaków Ludowych) in Kazimierz Dolny (a.k.a. Kazimierz nad Wisłą or simply Kazimierz): in the category of the best solo singer she won the Second Prize in 1991, 2001 and 2009 and the First Prize in 2016. In 2006, she was honoured with the Festival’s 40th Anniversary Medal. In 2014, she received the Honorary Bronze Medal For Merit To Culture ‘Gloria Artis’ from the Minister of Culture and National Heritage. In 2016, she was also awarded the Ludwik Michał Pac Honorary Medal from the Staroste (district governor) of Suwalski Poviat. On 13 May 2016, Anna Andruszkiewicz was given a prize in the ‘Origins of Music’ category, awarded by Polish Radio 2 to „folk artists who cultivate tradition and pass it down to the next generations and who have prominently featured in Polish Radio 2 broadcasts”. The official ceremony was held in Warsaw during the nineteenth edition of the Nowa Tradycja / New Tradition Festival.

Since 2001, Anna Andruszkiewicz has been a member of the Stowarzyszenie Twórców Ludowych (Association of Folk Artists). Although she has turned 96, she is still an active singer always willing to help young artists who wish to pursue their interest and expertise in local song tradition. 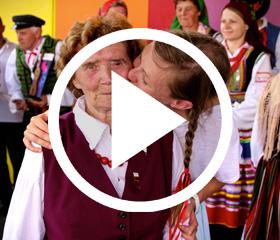