Łemkowski Zespół Pieśni i Tańca (Lemko Song and Dance Ensemble) ‘Kyczera’ was established in 1991 (it operates as a social and cultural association). The members of Kyczera are young Lemkos from the region of Dolny Śląsk (Lower Silesia). Ever since its inception, the group has employed more than half a thousand young artists. There are currently close to a hundred people involved in its activities.

Kyczera is principally focused on artistic operations. It is one of few establishments which promote the Lemko folklore. Overall, its repertoire includes both traditional forms, e.g. rituals such as ‘Lemko Wedding’ (in western Lemkivshchyna), ‘Sobitky’ (in the Lemko villages in the valley of the River Ropa) or stage performances of ‘Fedora’ (in Binczarowa and Florynka) and stylised forms, e.g. series of Lemko dances from Komańcza, Bednarka, Polany near Dukla and Nowa Wieś near Krynica. The ensemble almost exclusively uses its own programme concepts, based on its own source materials collected during field trips and research conducted in museum and library archives. The artists appear in national Lemko costumes, which have been reconstructed on the basis of original outfit elements found in Jaworki, Leluchów, Nowa Wieś, Bogusza, Świątkowa Mała, Polany and Komańcza.

Kyczera has given around 1200 concerts to date. It has appeared at innumerable prestigious festivals in such countries as Mexico, China, Indonesia, Georgia, India, Peru, France, Ukraine, Russia, Israel, Portugal and the Czech Republic. Their performances have met with enthusiastic acclaim at such events as the Międzynarodowy Festiwal Folkloru Ziem Górskich (International Folk Festival of the Highlands) in Zakopane, the Festiwal Folkloru Górali Polskich (Folk Festival of Polish Highlanders) in Żywiec, the ‘Ukrainian Song Around the World’ Festival in Kiev, the Ogólnopolski Festiwal Zespołów Artystycznych Wsi Polskiej (National Festival of Polish Folk Ensembles) in Kielce, the ‘Ziemia i Pieśń’ (‘Land and Song’) Festival in Szprotawa and the Music World Festival in Fivizzano, Italy. Kyczera has also been recorded on the radio and television and has released three CD albums, Cne mi sia za Tobom, Za horamy, za lisamy and Lemko, ja sy Lemko. The ensemble also manages a children’s section, ‘Kyczerka’ (little Kyczera). They present songs, dances, pastoral performances and a Christmas ritual called ‘Wertep’.

The largest cultural enterprise so far undertaken by the ensemble has been the organisation of the International Folk Festival ‘The World under Kyczera’. It normally runs for about ten days and spans two distant regions of Poland – Dolny Śląsk (Lower Silesia) and Małopolska (Lesser Poland), in addition to the neighbouring Slovakian village of Kurov included every two years. The city of Legnica is the hub of the Lower Silesian part and Krynica-Zdrój serves the same role in Lesser Poland. Every year, the Festival invites around ten ensembles, including 7 or 8 from abroad. Stage performances are complemented by parades and street entertainment, art workshops and displays of folk handicrafts and local cuisine. The Festival creates an opportunity to popularise the history and culture of the Lemkos amongst both domestic and international guests. There are not many events in Poland that activate small villages so intensively.

The ensemble has organised several scientific conferences (resulting in subsequent book publications), workshops with Lemko dances, presentations of traditional cuisine and contests for the oldest songs. It has collaborated with Polish Radio 2 on the release of the CD album Muzyka Źródeł. Mniejszości Narodowe w Polsce (Origins of Music. National Minorities in Poland), with the National Museum in Wrocław on the release of the DVD Dolny Śląsk. Lud, jego zwyczaje, sposób życia, pieśni, muzyka i tańce… (Lower Silesia. The People, Their Customs, Ways of Life, Songs, Music and Dances...), the Polish National Song and Dance Ensemble ‘Śląsk’ on its workshops and courses, and numerous cultural institutions, such as the Mazovia Institute of Culture in Warsaw, the Małopolska Cultural Centre ‘Sokół’ in Nowy Sącz and the Postgraduate Department of Choreography, University of Rzeszów.

Kyczera has created a specialist library. It collects publications, Polish and foreign, about the Lemkos and their land, and currently houses almost ten thousand volumes (books, newspapers, magazines and maps). It can boast a substantial audio-visual collection of albums, videos and interviews recorded during Kyczera’s field trips and source materials discovered in museum and library archives in Poland and Ukraine, e.g. Lemko songs recorded between 1909 and 1920 by the Ukrainian ethnographer and musicologist Osip Rodolski during his hikes and trips in the Carpathian Mountains. The library also houses a few dozen radio and television programmes about the history and culture of the Lemkos, as well as tens of cassettes and records with their music. One of the institution’s most significant enterprises has been the recording of fables, fairytales and stories of the Lemkos. In so doing, it has not only salvaged the nation’s folklore, but also its language and characteristic pronunciation, now largely affected by time and repatriation. The album was recorded by the most eminent representatives of the Lemko community in Poland, such as Julia Doszna, Piotr Trochanowski, Teodor Gocz, Mirosława Chomiak, Paweł Stefanowski, Olena Duć-Fajfer and Aleksander Maślej. The library has also accumulated an impressive collection of source materials. Working on the book Ubiory Łemków w XIX – I połowie XX wieku (The Lemkos’ Garments in the Nineteenth Century and the First Half of the Twentieth Century) was a chance to take more than four thousand photographs of details and accessories of Lemko costumes found in private and museum collections scattered around Poland, Ukraine, Russia, the United States and Canada. Kyczera’s archive contains a few hundred archival photographs, original or scanned. There are also a few dozen scanned unique nineteenth-century watercolours, drawings, prints and engravings, including works by Andrzej Grabowski, Kajetan W. Kielisiński, Jerzy Głogowski and Sister Urszula Ledóchowska. A large part of these materials have been shown at exhibitions and conferences organised by the ensemble (i.e. The Lemkos in Lower Silesia – Yesterday, Today and Tomorrow in Legnica, The Lemkos – the Last Mohicans of Europe in Krynica-Zdrój, Stanisław Leszczycki’s Photographs of Lemko Villages in the 1930s, The Lemkos in Legnica Land and The Lemkos in Fedor Wołek’s Photographs Taken on His Expedition in 1906).

The ensemble also maintains a special ethnographic chamber. The collected exhibits, archives and photographs have been frequently shown at temporary exhibitions organised at external venues, such as the National Museum in Wrocław, the Museum of Lubin Land, the District Museum in Środa Śląska, the Museum of Archaeology and History in Głogów, the Public Library in Legnica and the Cultural Centre in Dzierżoniów.

As if all of these activities were not enough, the ensemble has published a number of valuable books, such as Łemkowie, Bojkowie, Rusini – historia, współczesność, kultura materialna i duchowa / The Lemkos, the Boykos and the Ruthenians – History, Modern Times, Material and Spiritual Culture, a joint effort by several authors (Legnica – Zielona Góra 2007), Dola Łemka / The Plight of the Lemko by Michał Oleśniewicz (Legnica 2009), Wesele łemkowskie obrzęd i muzyka. Tradycja a współczesność / The Lemko Wedding: Ritual and Music. Tradition versus Modern Times by Bogumiła Tarasiewicz (Legnica 2009), Śpiwanky baby Olhy / The Songs of Granny Olga by Bogumiła Tarasiewicz and Jerzy Starzyński (Legnica 2009), Jak Lypniane sonce do micha imaly. Bai, bajky i opowidanky Lemkiw with traditional Lemko tales and stories, by Jerzy Starzyński and Anna Rydzanicz [ed.] (Legnica 2010), Łemkowie wczoraj, dziś, jutro? / The Lemkos Yesterday, Today and Tomorrow? by Jerzy Starzyński and Bogumiła Tarasiewicz (Legnica 2011) and Ubiory Łemków w XIX – I połowie XX wieku / The Lemkos’ Garments in the Nineteenth Century and the First Half of the Twentieth Century by Jerzy Starzyński. In 2012, the ensemble published Poradnik metodyczny dla nauczycieli języka łemkowskiego (A Methodological Guide for the Teachers of Lemko) by M Chomiak and J Henzel. 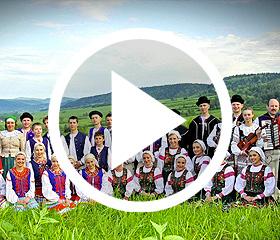