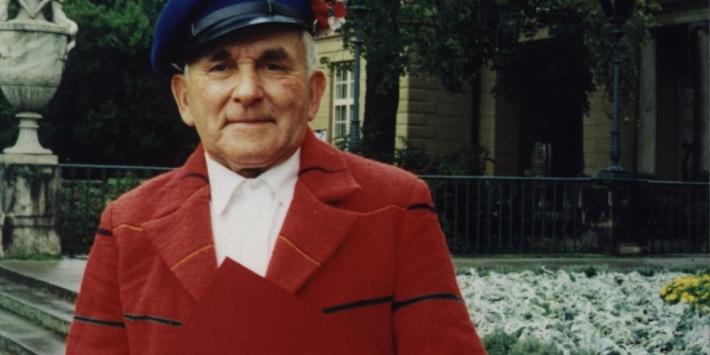 Tadeusz Krata was born in 1929. He lived in Rembiszów in Łódź Voivodeship, and was a very well-known musician. He learned to play the fiddle from his father. As a small boy he accompanied his father to rural weddings and parties, where he played on a little drum. After being resettled in Germany for forced labor, he began to play by himself melodies remembered from the old repertoire of his father. For many years, playing as a soloist and in a band from Woźnik (consisting of fiddle, accordion, and drums), he enriched his repertoire with old tunes heard in childhood which were popular in Sieradz – owijoks (a local style of oberek from Sieradz), polkas, and chodzonys (a type of slow folk dance). He regularly participated in folk competitions and reviews. He performed with the Zespół Obrzędowy from Chojne (Ceremonial Group from Chojne) during its numerous concerts, contributing to its success and receiving awards. Krata was also an organizer of folk cultural activities. Thanks to his initiative and efforts, the village Branica revived the custom of having a Shrove Tuesday costume parade. Recordings of music by Krata are gathered in the collection of Culture House in Sieradz, in the archives of Polish Radio in Warsaw, Lublin and Rzeszów, and in the Institute of Art of the PolishAcademy of Sciences in Warsaw. He participated in many folk reviews, and repeatedly received first and second prizes. In 1989, he received the Sieradz Voivode Award, and in 1993, the Medal of Merit to Culture. Krata died in 2003.