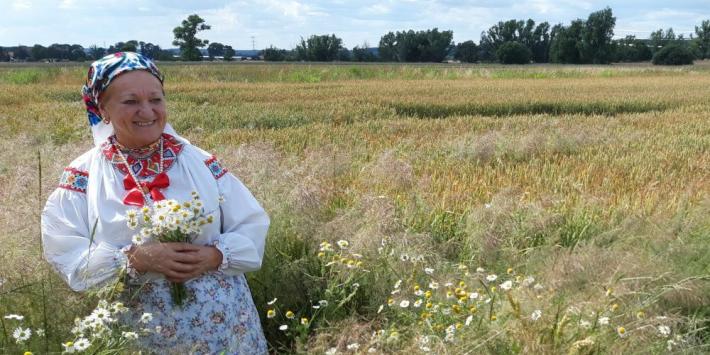 Field of activity : Folk singer. promoter of the legacy of the Czadca Highlanders: Rituals, plastic arts and culinary traditions

Zofia Tarasiewicz is the daughter of Polish repatriates from Bukovina, who settled in Lower Silesia, in the village of Zbylutów near Lwówek Śląski shortly after the Second World War in 1946. She was born in the 1950s. She is currently one of the most eminent performers of ancient folk songs in Poland. Zofia learnt her characteristic style and repertoire from her family: parents, aunts and uncles, who had, when they were younger, met at posiady (a type of local entertainment) on the slopes of Mount Wieża near the village of Dunawiec in Bukovina, then still within the boundaries of Romania. The songs they sang were about love and longing for your loved one, about the wars fought against the Turks and the young men recruited to the imperial army in Pressburg (currently Bratislava in Slovakia). A lot of them told about genuine happenings in the lives of the villagers. They elicited memories and plaintive contemplations on the vicissitudes of fate. The elders told stories about the times when they had to grub out beech forests to make room for their new households. Their ancestors had arrived in Bukovina more than a hundred years earlier from Czadca Land on the border of Poland, Czechia and Slovakia picturesquely located in the basin of Kysuca River. The contemporary imperial government of Austria-Hungary was intensively populating the hitherto uninhabited terrains of Bukovina. Apart from the Poles, the arriving settlers included Romanians, Czechs, Slovakians, Ruthenians, Germans, Hungarians, Armenians and Jews, all co-existing in harmony. The Czadca Highlanders born before the Second World War can still speak two, or sometimes three, languages. Some of them jokingly boasted that they were born in the Austrian-Hungarian Empire, grew up in Romania and spent their adult lives in Poland.

The post-war political order divided the ‘Beech Land’ (in Polish, ‘Bukowina’ refers to the beech tree – buk) between the Soviet Union (north) and Romania (south). In 1946, the Poles from Dunawiec, which lied in the north, made a unanimous decision to leave Bukovina and move to Poland. They were fearing persecution from the new Soviet authorities on account of their Polish nationality and Catholic religion. Similar to any other emigration, this one also brought about a lot of plight and hardship. In Poland, the Czadca Highlanders were settled across several different, albeit neighbouring, provinces – the Dolnośląskie, Lubuskie and Wielkopolskie voivodeships. Zofia’s family found themselves in the village of Chmielno near Lwówek Śląski in Lower Silesia (Dolny Śląsk). Several families from Dunawiec in Bukovina also found their new home in Chmielno and in nearby Zbylutów.

When Zofia was a small girl growing up in the 1950s, she was especially fond of her grandfather Michał Irski (died in 1980) living in Zbylutów, who taught her a number of songs he still remembered from his youth. He was very proud of the Cross of Independence he had received directly from Marshal Józef Piłsudski. He had served as the Marshal’s orderly, when the Polish army was being formed in Bukovina and he accompanied him during military campaigns. Michał would regale his granddaughter with stories of his adventures. After the First World War, Irski made a difficult decision to stay in his native Dunawiec rather than move and settle in Warsaw, much to the Marshal’s chagrin. When he was already living in Lower Silesia after the Second World War, he would bitterly admit that it was not the Poland he had fought for (at that time being under the communist Moscow-forced regime). He remained a revered authority for the inhabitants of the village and a model example of a staunch Polish patriot up until his death.

Zofia Tarasiewicz still loves to reminisce about her grandfather and his brothers, who revelled in singing songs every time they met for familial celebrations. One of her uncles, Kuba Bożyk, an inveterate story-teller, would sing for hours on end along with Zofia’s father Bolesław Delus (originally Delost), whenever he came round to weave wicker baskets. Zofia was keen to memorise as much of that repertoire as she could. For dinner, they would have a Bukovina-style mamałyga – a porridge made out of yellow maize flour sliced with a thread. It was seasoned with oil and some ground garlic to taste. For dessert, they helped themselves to pampuszki, a regional type of doughnuts.

Zofia adored singing with her grandpa Michał and with her own parents. Performing alongside her mother Anna and her father, she appeared at public ritual festivities organised in nearby Zbylutów. They were initiated by the members of the local vocal ensemble named after the place the older villagers had left behind – the Dunawiec Ensemble. It was intended to keep up the memory of ancient traditions, despite relocation and the unrelenting passage of time. One of the most ardent promoters of traditional customs was Honorata Lechocka (born in 1906), who “always liked to dance and sing; the blow of a breeze was enough for her to want to stand up and dance. She was like the wind… When we were recording Swojskie klimaty [a TV programme, whose title roughly translates as ‘homey vibes’], she made a point of recreating all the right gestures of the jeliń dance. Bear in mind, she was almost ninety at that time” – Zofia says with admiration. Honorata would often comment: „My body is old, but in my head I still feel sixteen”. Other local guardians/sentinels of tradition included Maria Najdewska and her husband Hieronim Najdewski – the late parents of Jadwiga Puszkarz, present manager of the ensemble – as well as Teresa Drozdek, who can still make intricate dziordany from glass beads (necklaces for ceremonial women’s costumes). “They are my life’s masters, each one of them” – acknowledges Tarasiewicz.

Not much has been left of the village of Dunawiec, now within the boundary of the Republic of Ukraine. The singer has visited the place twice – in 1999 and 2000. She has poignant memories of seeing her ancestral land – fruit trees gone wild, remains of former basements, old wells and overgrown paths that she could recognise from her mother’s tales. The houses themselves had long since been reused as building material by the neighbouring inhabitants. What is left of that old world is only the songs. They have been saved by the Czadca Highlander community despite the turmoil of migration. They are a memento of the trodden paths and travelled highways.

Zofia Tarasiewicz presented this repertoire as soloist at the famed and prestigious National Festival of Folk Bands and Singers (Ogólnopolski Festiwal Kapel i Śpiewaków Ludowych) in Kazimierz Dolny nad Wisłą in 1996 and 2001. She was twice awarded the highest prize ‘Baszta’ (‘Tower’) for her marvellous interpretations. Her performance of the age-old song Jeliń during her second appearance was one of the highlights of the whole festival. In the meantime, in 1997, she appeared at the Teesside International Eisteddfod in Middlesbrough, United Kingdom, the oldest music festival in Europe, during which she also had a recording session for BBC Radio. At the Fifty-Second Festival in Kazimierz Dolny nad Wisłą in 2018, she performed some more śpiwanki (local songs) from Bukovina, which she had unravelled from the bottomless pit of people’s memories. She was again applauded for her musical mastery; she received the First Prize in the solo category.

In 2019, Zofia Tarasiewicz was invited to the Fifty-Fourth International Festival ‘Wratislavia Cantans’ held at the National Forum of Music in Wrocław. She took part in a series of concerts dedicated to early folk music called Pieśni z lasów i pól (Songs from the Woods and the Fields) singing about a young boy forcefully recruited by the Austrian imperial army, about an orphan girl married against her will and about a woman wishing to be young again. These songs had once been sung on the slopes of Mount Wieża (literally Tower) in old-time Bukovina by people who had also left their youth there.

For the last four decades, the artist and her family have lived in the town of Bolesławiec. She is regularly invited to tradition-themed festivals and museums. Collections with her Bukovina-style decorated Easter eggs are kept by the Muzeum Karkonoskie (Museum of Karkonosze Mountains) in Jelenia Góra, Poland and the Schlesisch-Oberlausitzer Dorfmuseum in Markersdorf, Saxony, Germany. She has displayed her traditional Bukovina baked goods at the National Museum of Ethnography in Warsaw. In 1999 and 2000, she collaborated on the museum exhibition Pamiątki Wędrówki (Souvenirs of the Trek) at the Muzeum Karkonoskie in Jelenia Góra and the Museum of Ethnography in Wrocław, where she displayed portraits of the first repatriates and commemorative objects they kept during their post-war relocations. Some of them, which had not been used for decades, were subsequently donated to the museum in Jelenia Góra, e.g. old-fashioned quern stones and lax hackling machines.

Zofia Tarasiewicz was one of the first singers still cultivating genuine Czadca Highlander traditions spotted and admired by the general public. Her masterful and exceptional performances have drawn people’s attention to the rich resources of the ancient vocal treasures stored in the memories of her kith and kin. Her repertoire features recruiting songs, orphan songs, courtship songs and ballads. They are characterised by an original style of rendition, which forms a continuum with the authentic tradition brought by the repatriates, all the way from Czadca Land through Bukovina to Lower Silesia. Documentation of the artist’s songs is kept in the archives of the Institute of Art at the Polish Academy of Sciences in Warsaw and the Muzeum Karkonoskie. Some of her songs are featured in the well-known CD series ‘Sources of Polish Folk Music’ (volume 26), released by Polish Radio 2. The singer is not ready to retire just yet; she is still searching for songs that she has not sung before – they might still be stored in the memories of the Polish repatriate families from Bukovina. She is convinced there are still a lot of them out there waiting to be rediscovered.