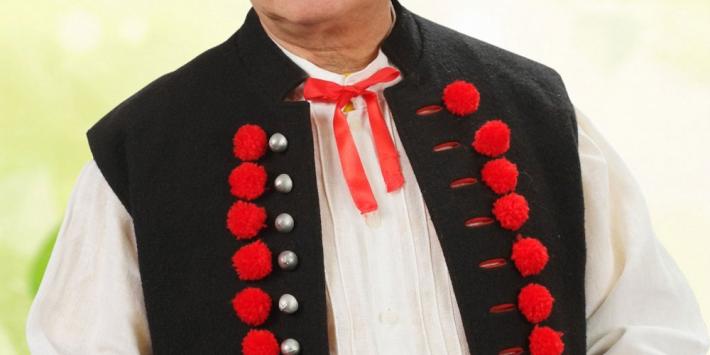 Jan Brodka is an instrumentalist (trembit, bagpipes, heligonka), folklorist, researcher of music from the Żywiec region, and tutor of musicians and folk teachers.

Jan Brodka is an instrumentalist, folklorist, and propagator of the folk culture of the Żywiec Beskids. Born in 1945, he lives in Twardorzeczka (Lipowa Municipality, Silesian Voivodeship). He has invested all of his professional, artistic, educational, and organizational efforts into the Żywiec area. He first began working towards protecting and popularising local folk culture in 1966, when he took up the position of music instructor of the Żywiec regional group. The scope of his interests and creative projects soon started expanding to include his own musical activity (playing on various local instruments: trembit, bagpipes, heligonka); original research into a range of regional band performances; theoretical and practical musical tuition, involving forming new professional groups and expanding the competencies of young musical folklorists;  and organizing and supporting major folk-related events (showcases, festivals and competitions) of local, national, and international reach.

Since 1967, he has been pursuing a number of his own artistic and educational initiatives, as well as leading several bands in the city of Żywiec and its surrounding area.  Between 1967-77, he led the following groups: Famed, Sędzioły, Lipowinie, Gronie, and Beskidy. The project that stands out in his decades-long career is the Ziemia Żywiecka (The Żywiec Region) Folk Group for Dances and Songs. Brodka co-founded the band in 1971, and has acted as its artistic and managing director ever since, but more importantly, he has been researching and creating the musical basis for the group’s dance performances, which constitutes its core activity.

Under Brodka's direction, Ziemia Żywiecka has had many successes at regional and national contests, as well as at international folk festivals. In 1993, they received the Oskar Kolberg Award and has consistently maintained the highest level of artistry. The band later became affiliated with the Municipal Culture Centre in Żywiec, where Brodka works as the chief specialist in folk culture and crafts.

He has educated several generations of dancers and aficionados of traditional culture, many of whom founded their own folk dance and vocal groups. He cooperates with young folklorists, offering them advice on research, help in perfecting musical and teaching abilities, and support with organising events. Since 1968, he has lectured at the Polish Community’s Folk Culture and Dance Academic Centre of the Maria Skłodowska-Curie University in Lublin, as well as at various seminars and training workshops, organized by such institutions as the Regional Culture Centre in Bielsko-Biała and the Municipal Culture Centre in Żywiec, and targeted at instructors, band leaders, and teachers. He is the author of such publications as Folklor Górali Żywieckich / The Folklore of the Żywiec Highlanders (co-edited by Maria Romowicz, 1978), Muzyka Ziemi Żywieckiej / Music of the Żywiec Region (1998), and Grajom skrzypki, dudniom basy. Ludowe muzykowanie na Żywiecczyźnie dawniej i dziś / The Violin Plays, the Bass Rumbles: Folk Music in the Żywiec Region Then and Now (Karta Groni publishing, 2003). His creative output includes preparing folk programmes based on the arts of the city of Żywiec and of the local highlanders, performed by folk groups in Poland and Polish community groups in France, the UK, and the United States. He also composed (and performed) bugle-calls commencing the chief folk event in the Beskids (Beskid Culture Week).

In spite of his advanced age, Jan Brodka continues to be active as a coordinator of art projects, a jury member, and an advisor for various folk showcases, festivals and competitions in Poland and abroad, including Żywieckie Gody, Beskid Culture Week, International Instrumentalist Showcase, the Pastorałka Żywiecka International Showcase of Christmas Carols and Żywiec Pastorals, Folk Raconteur Competition, Polish-Slovakian Competition of Folk Bands, Vocal Groups, Vocalists, and Instrumentalists, and the Polish Highlanders’ Folklore Festival in Żywiec.

He has received numerous distinctions, medals, and awards, such as: the Honourable Cultural Activist distinction (1981), the Badge of Merit for the Bielsko-Biała Voivodeship (1986), a Diploma from the Minister of Culture for the Popularization of Folk Culture (1996), Award from the Bielsko-Biała Voivode for Popularization of Culture (1998), the Medal from the Commission of National Education for Special Merits for Education (2001), the Golden Cross of Merit (2004), Medal for the Merits for the City of Żywiec (2005), Award from the Marshal of the Silesian Voivodeship for popularization and protection of folk culture (2005), Golden Honorary Badge for merits for the Silesian Voivodeship (2006), the Merit to Polish Culture Badge (2007),  Silver Gloria Artis Medal (2009), and the Władysław Orkan Award (2010). 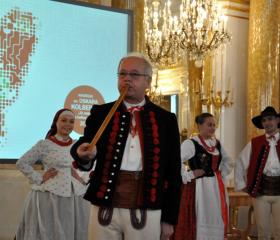