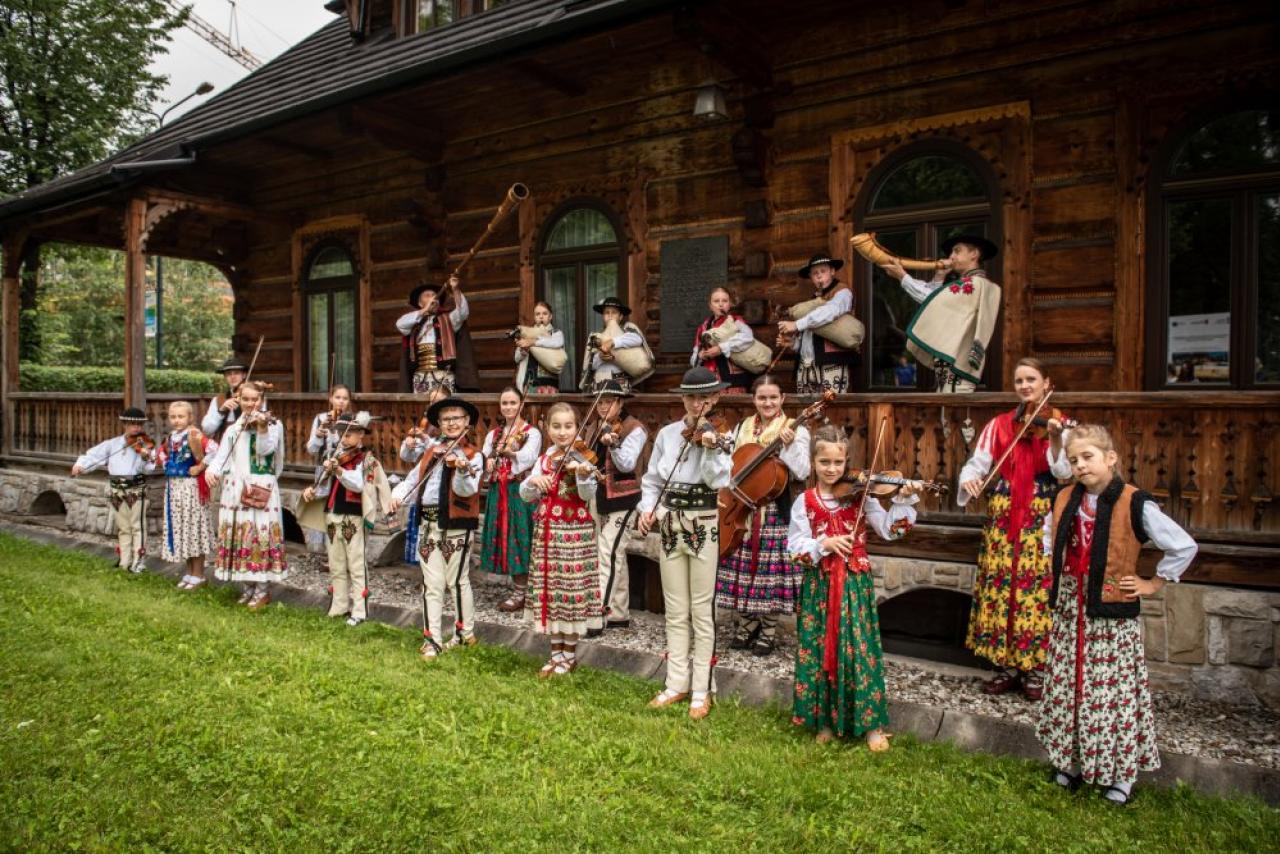 Zornica (literary Polish: jutrzenka) means „aurora, dawn or the Morning Star” in the dialect of the Polish Highlanders from the Tatra Mountains in the south of the country. The ensemble is affiliated with the Tatrzańskie Centrum Kultury i Sportu (Tatra Mountains Centre for Culture and Sport) ‘Jutrzenka’ in Zakopane. It was founded in 1988 by a poet, excellent dancer and regionalist, Jan Fudala (1951-2008), who directed the establishment until 2003. The ensemble still upholds the ideals for which it was originally set up: teaching and passing on the highlander traditions of the Tatra Mountains to the successive generations of children and youth. In their numerous programmes and concert performances, the members of the ensemble showcase the songs, dances, music, customs and children’s games from the region of Skalne Podhale (Rocky Podhale). Their shows have been critically acclaimed for the artists’ high level of musicianship and sophistication. The initiators and members of the establishment go to great lengths to create an environment in which the performers – children, adolescents and youths – are taught not only how to sing and dance the traditional highlander repertoire of the Tatra Mountains, but also how to best perform on musical instruments in concert. Thanks to these efforts, the region of Podhale can impress the other parts of Poland with the sheer number of skilful fiddlers it regularly produces.

The Zespół Góralski/Highlander Ensemble ‘Zornica’ has employed some eminent instructors and directors: initially the unforgettable Jan Fudala and, later, Elżbieta Porębska-Mędoń and Szymon Bafia, a talented piper, who introduced, in association with the Tatra Mountains Centre for Culture and Sport ‘Jutrzenka’, lessons of bagpipes for the youngest generations of Polish highlanders. His numerous pupils have already appeared in individual performances, with much success, at a number of prestigious events, such as the National Festival of Folk Bands and Singers (Ogólnopolski Festiwal Kapel i Śpiewaków Ludowych) in Kazimierz Dolny nad Wisłą, the folk music competition in Bukowina Tatrzańska and several carolling competitions. Zornica can boast a large instrumental ensemble for children, who have received prizes at national competitions and at the International Highlander Festival (Międzynarodowy Festiwal Ziem Górskich). The institution also supports young dancers. The musical instrument classes conducted by the Zornica instructors use traditional methods and techniques, on several levels of competence, to impressive effect. The educational staff of Zornica have included, between 1988 and 1994, such famous personalities as the legendary Władysław Trebunia-Tutka (1942-2012), his son Krzysztof Trebunia-Tutka and, most recently, Krzysztof’s daughter Anna Trebunia-Tutka, who directs both the principal ensemble and an all-female group.

The Highlander Ensemble ‘Zornica’ has successfully appeared at numerous competitions, regional, national and international, including the Frankfurt Competition in 1995, the National Children’s Dance Ensemble Festival (Ogólnopolski Festiwal Zespołów Tanecznych Dzieci i Młodzieży) in Gorzów Wielkopolski in 1998 and the European Children’s Contest (Europejski Przegląd Twórczości Dziecięcej) in Karlino in 2000.

Throughout the thirty-two years of its existence, the ensemble has trained and collaborated with a host of performers, singers, dancers and musicians; not only did they spend a wonderful time, but they also had an opportunity to learn a great deal about their native region of Podhale. The local saying (in the Polish Highlander dialect) says: W doma, na polanie, cy przy chałpie … wsyndyj gromy ka sie ino do ... i ka mozno!, which roughly translates as “regardless of where we are, be it at home, out on the porch or down in the green field, music is always with us”.