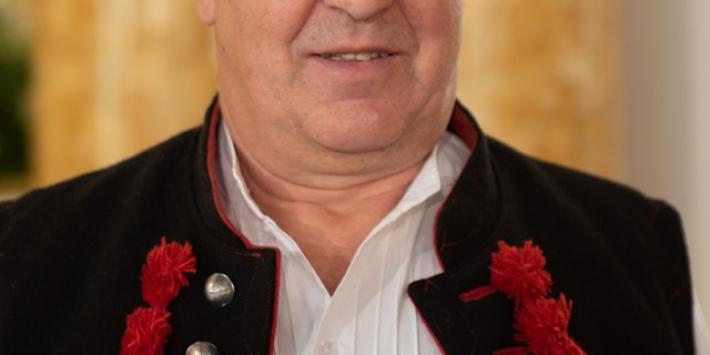 Czesław Węglarz (born in 1957) familiarised himself with music in his early childhood. He was born into a family where music and song had always featured prominently. His grandfather Wojciech had a collection of musical instruments and he could play several of them. He knew many local melodies and he would recreationally play the fiddle on a Sunday after a week of hard work. Czesław and his brother would always strain their ears to catch those melodies and they were eager ‘testers’ of the flutes (in a version without fingerholes) that their grandfather made. Czesław Węglarz still regrets that he was not attentive enough to remember the different melodies his grandpa used to play. His father Jan could play the heligonka and regularly performed at village weddings.

When he was in sixth grade (at the age of 12), Czesław Węglarz wanted to play the accordion. His instrument weighed ten kilograms, but that did not bother him – he carried it all the way to his classes in the village of Węgierska Górka, three kilometres away. He also played the reed organ and, later, the piano, as soon as the instruments had appeared in his home. During his university studies, he picked up the double bass that he played in a student band called Torka that he had himself founded.

His serious interest in folklore and folk music started in the late 1970s, when he was a student of music education at the Silesian University in Cieszyn and had an opportunity to meet folklorists, musicians and folklore lovers, including such genuine masters as Adolf Dygacz, Ryszard Gabryś and Alojzy Kopoczek. He has remained faithful to folk instruments and traditional music ever since. After graduating, he became a teacher of music in Kamesznica, and then Cisiec, and promoted the music of Żywiecczyzna (the area around the city of Żywiec) amongst children and youth. In the early 1980s, he made a decision to recreate the archaic highlander ensemble: he bought bagpipes and learnt how to play them all by himself. The beginnings were troublesome – the instrument proved to be unlike anything he had played before; it was a whimsical instrument which required a lot of patience and consistency. If you only leave it for a while, you have to tune it again, patiently and long. The highlanders even say that “if you leave it for too long, you will anger it”.

He purchased his first bagpipes from a poor peasant living in Jałowiec near Koszarawa. „It was a very simple instrument, almost primitive, its reeds were made from one piece of lilac, but it was playable” – he recollected many years later. Inspired by the tales of Żywiec highlanders playing the gajdy told by his grandmother Ludwika, he also decided to buy that local type of the instrument. Musicians from Żywiecczyzna played both types of the instrument – while the standard bagpipes were used in the villages lying down the River Koszarawa, the gajdy variant, particularly popular in the Silesian Beskids, in the villages located on the River Soła. Ostensibly, it is hard to spot any conspicuous differences between them, but there are only 7 sounds that can be played on the gajdy rather than 8 on the standard bagpipes. What is more, while you pump the air into the gajdy with the help of bellows, you breathe it through a tube with a reversing valve if you want to play the bagpipes. Therefore, if you want to make the sound louder, you simply either pump or breathe harder, depending on the instrument.

Węglarz was looking for a gajdy all around Żywiecczyzna but he found none that he could afford. The instruments made by Ferdynand Suchy from Ustroń, a reputable gajdy builder, were too expensive for him. In the end, he had no choice but to make the instrument himself. The gajdy that he eventually produced was modelled on the instrument by Jan Kawulok from Istebna, thereby he became the only other man that had ever built that version. He used what was left of the gajdy from Kamesznica to make the bag, called dymlok, and he acquired the goatskin, but he faced the biggest problem when it came to the part called gajdzica. He had to make repeated efforts to finally reach the desired arrangement of holes and position of the reed. Węglarz has been playing the instrument thus made ever since. He has received orders for more copies that will most likely keep him busy for the next few years. He has also been his own teacher when it came to playing the fiddle or some other instruments; he just paid close attention to how his colleagues played and then put a lot of effort into perfecting his own techniques.

As a musician and an expert on folklore and traditional repertoire, he spent a dozen years working as an instructor of music with the Regional Song and Dance Ensemble Wierchy from Milówka. He has also shared his knowledge with other folk music ensembles from Żywiecczyzna: Gronie and Sędzioły from Żywiec, Haśnik from Węgierska Górka, Grojcowianie from Wieprz and Juhasfrom Ujsoły. He devoted many years to enrich the ensemble Ochodzita with the unique sounds of pastoral instruments. He could occasionally work with two or three folk ensembles at any one time.

His keen sense of research and exploration has allowed him to delve into old and forgotten repertoires of songs, wedding songs and melodies copied from local gajdoszs by the violinist Józef Szczotka. Therefore, he practically reinvented the standard folk repertory and saved innumerable musical works from total oblivion. He has also provided musical notation for Śpiewnik górali polskich (Polish Highlanders’ Songbook) and Śpiewnik karpacki (Carpathian Songbook). His recordings are kept in the archives of Polish Radio in Warsaw and Radio Katowice, as well as on numerous CD albums. As an expert on folk music of the Żywiecczyzna highlanders, he has been a frequent member of the juries at prestigious festivals, competitions and contests of folk ensembles. In addition, he is always willing to collaborate with museums and cultural establishments by providing his extensive expertise and skills and showcasing unique instruments. He has been an outstanding promoter of folk music from Żywiecczyzna. He has also appeared in documentary and educational programmes on television and radio.

Czesław Węglarz has been widely regarded as a wonderful and patient teacher and instructor of young artists. He is the manager of the Children’s Ensemble Małe Cisy affiliated to the Combined Schools in Cisiec. He has also been employed at the State School of Music in Żywiec in charge of a class of folk instruments, one of only two such classes in Poland, where he teaches bagpipes, fiddle, bass instruments, flute-type instruments and ocarina. He has also cooperated with the Fundacja Braci Golec (Golec Brothers Foundation), where he teaches gajdy and dudy (standard bagpipes). Working with young people, he tries to instil in them his love of and respect for tradition and culture, folk music, traditional instruments, local dialect and the local and neighbouring repertoire – he encourages people to seek out the repertoires in their own cultures and roots. The artist has also been responsible for the education of a host of excellent musicians and instrument makers. His pupils have received prizes and honourable mentions at the largest festivals and competitions of folk music in Poland in the categories of instrumentalist, master and pupil and folk band contests.

Czesław Węglarz has won numerous individual prizes and honourable mentions, too. In 1980, he won the First Prize at the Ogólnopolski Przegląd Gry na Instrumentach Ludowych (National Presentation of Folk Instrument Performances) in Ciechanowiec, where he played the ligawka (a wooden horn). He has also been awarded at the Konkurs Gry na Unikatowych Instrumentach Ludowych (Performance Competition of Unique Folk Instruments) in Wieprz near Żywiec. In 1986 and 1997, he won in the ‘Big-Small’ category at the Ogólnopolski Festiwal Kapel i Śpiewaków Ludowych (National Festival of Folk Bands and Singers) in Kazimierz Dolny, and in 1993, 1999 and 2002 was given the ‘Golden Heart of Żywiec’ in the ‘Master and Pupil’ category at the Festiwal Folkloru Górali Żywieckich (Folk Festival of Żywiecczyzna Highlanders) in Żywiec. During the latter festival in 1990, he won another ‘Heart’ for the best instrumental musician. With the Song and Dance Ensemble Wierchy from Milówka, he has won several ‘Golden Hearts of Żywiec’ and a ‘Golden Shepherd’s Axe’ at the Festiwal Folkloru Ziem Górskich (Folk Festival of the Highlands) in Zakopane. In 2018, he received the ‘Baszta’ (‘Castle Tower’) award for the best solo instrumentalist at the festival in Kazimierz Dolny. In the same year, he was honoured with the prestigious ‘Origins of Music’ prize awarded by Polish Radio for the most distinguished folk artists. During the ceremony, he appeared with his own family ensemble, his daughter and sons, who inherited his love of highlander music.

All his endeavours are aimed at preserving and perpetuating the tradition of folk instrument performance. By doing what he does, the artist lets the listeners enjoy the beautiful sounds of these instruments and the music they have prompted – the forgotten songs that he has been influential in restoring and promoting, but also the local dialect that is no longer spoken as widely as it used to, in short – everything that has made the culture of Żywiecczyzna highlanders what it is. Czesław Węglarz is a genuine ambassador of Żywiecczyzna. He is a wonderful teacher and an unrivalled master. 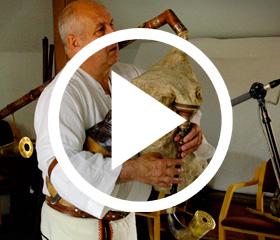