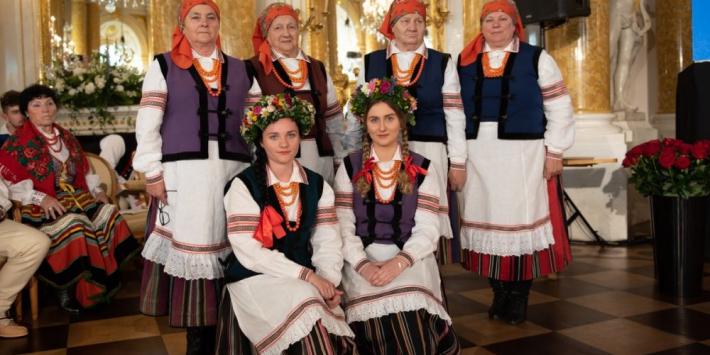 Sielanki from Sielec is the oldest active vocal ensemble in the commune of Leśniowice, where the local Community Centre also supports two other folk ensembles: Kumowianki from Kumów and Rakołupianki from Rakołupy.

The village of Sielec sits in the valley of the River Krzywólka between Chełm and Wojsławice. It is populated by native Sielec families, descendants of the post-WWII Polish repatriates from the present-day Republic of Ukraine and newcomers from the neighbouring villages.

Organised folk music was initiated in Sielec by its Koło Gospodyń Wiejskich (Village Women’s Club) back in the 1950s. The Club’s managers Janina Dąbrowska and Krystyna Pawliczuk founded the Vocal Ensemble Sielanki in 1976. The all-female group initially employed 12 singers. Franciszka Bydychaj is the current manager of the ensemble; she has held this position for the last twenty years. The other members are Halina Staniuk, Danuta Drogomirecka, Maria Dutkiewicz, Emilia Gryniuk and Klaudia Palczyńska.

Sielanki has performed both locally, in the village of Sielec and throughout the commune of Leśniowice, and nationwide, at numerous regional and national events, e.g. the festivals in Kazimierz Dolny and Bukowina Tatrzańska. Its dedication to keeping alive the musical, vocal and ritualistic traditions is complemented by its active involvement in religious celebrations, communal events and educational projects aimed at popularising decorative and ritual folk arts. The Sielanki members produce harvest festival wreaths, Easter palms and eggs, as well local culinary delights. They also meet with young people in order to instil in them their passion for customs and rituals that have been practised in and around the village of Sielec for generations.

Sielanki’s performances juxtapose pieces that have been traditionally sung in the commune of Leśniowice with the ‘borderland’ repertoire that originated on the other side of the River Bug. Their songs are in fact lengthy tales of history, religion, love and even courtly life, owing to Anna Piskorska, who worked in the palace of the Rzewuski family in Sielec before the Second World War.

More than forty years’ artistic work has allowed the ensemble to uphold the traditional values with regard to content and performance practice used in vocal folk music, rituals and customs of the region. Franciszka Bydychaj serves as an excellent example of how the Eastern borderland traditions can still be kept alive as she inherited them from her mother. Bydychaj was born in 1939 in Kąty near Luboml, then in Poland and now in Ukraine. After the Second World War, in 1945, her family was repatriated across the River Bug to the village of Sielec.

The unique borderland repertoire has been saved from oblivion thanks to the talent, dedication and hard work of the singers representing the last generation of performers who can recognise the original content, style and accent.

Sielanki has won a host of prizes at numerous folk music events, e.g. the Chełmski Poviat Presentation of Vocal Ensembles, the Presentation of Carols and Szczodrywki in Dorohusk, the Inter-Poviat Festival of Vocal Ensembles in Werbkowice and the Regional Presentation of Songs and Folk Songs in Rejowiec. Qualifying through the local and regional preliminary rounds, the singers have also reached the final stages of the famed National Festival of Folk Bands and Ensembles (Ogólnopolski Festiwal Kapel i Śpiewaków Ludowych) in Kazimierz Dolny (a.k.a. Kazimierz nad Wisłą or simply Kazimierz), where they were awarded several prizes and honourable mentions, i.e. the Third Prize in 1993, an honourable mention in 1997, the First Prize in 2002, the Third Prize in 2006 and the most-coveted ‘Baszta’ (‘Castle Tower’) prize in 2016.

Transcriptions of selected songs performed by the Vocal Ensemble ‘Sielanki’ from Sielec were published in Tradycyjne pieśni polskie z obu stron Bugu (Traditional Polish Songs from Both Sides of the River Bug) in 2009. 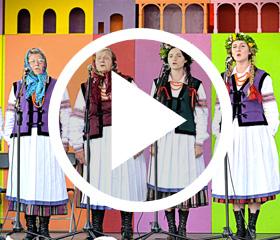