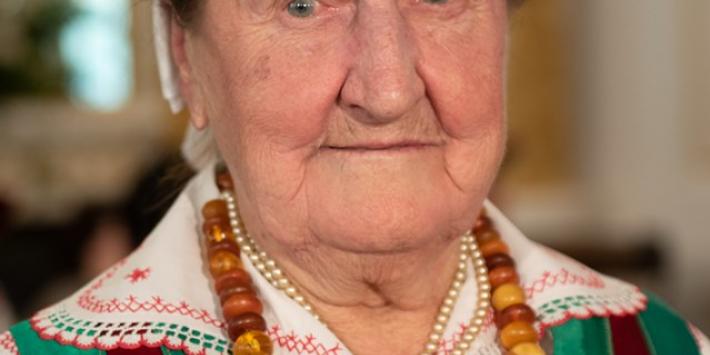 Marianna Bączek was born in 1931 in Bandysie, a village in the commune of Czarnia, in the region of Kurpie. The area has traditionally been covered with thick forest, which contributed to its isolation and, as a consequence, eventual preservation of numerous interesting archaic songs and existence of excellent performers. Marianna Bączek is a living encyclopaedia of Kurpie songs. She has been interested in the local customs and songs since her early childhood; she heard her grandmother sing them while doing her house chores, but she mainly inherited them from her father, a wedding and funeral singer, and from her uncle, a musician. Village children before the war had to work hard and she was no exception, but that ethos and harsh conditions might have contributed to her current expertise (she can remember the entire Kurpie repertoire). „You would sit at the loom weaving or get together with your neighbours to pluck the feathers and we would always sing, especially during Advent”. She has always been especially praised for her interpretations of ‘forest’ songs, short rhyming songs with the so-called przytrampywanie (stamping the feet) and wedding songs. For many years, she served as the so-called czepkarka at weddings – she had to be an expert at all the detailed elements of the wedding ritual, including the music.

Bączek also specialises in funeral songs; until recently she was regularly invited to perform at funerals. „It is a shame that young people now are no longer interested in this tradition. One of my fellow funeral singers has left the village and another has been forbidden by her doctor to sing anymore. Only my third colleague still goes to funerals, even though her legs hurt, just like mine”(interview on Polish Radio, 2011).

She is a genuine natural promoter of the singing movement in the region of Kurpie. She has been a member of several vocal ensembles: Carniacy, Bandysie and Długodzanki (the Oskar Kolberg Award in 2000).

„Even now when we, the older women, come together, they might still invite us to sing sometimes” – Marianna Bączek commented, with her characteristic Kurpie accent, on Polish Radio during the Nowa Tradycja / New Tradition Festival in 2011, when she performed in a ‘Muzyka Źródeł’ (‘Origins of Music’) concert. The ensembles she appears with like to add the przytrampywanie to their singing – all the singers stamping the rhythm together brings a lot of authentic energy and sprightliness to the performances. The songs are relics of the ancient parade dances, which can now only be seen in the area of Kurpie Zielone (Green Kurpie).

Marianna Bączek has taken part in multiple competitions. Her rich repertoire of songs and tales of old rituals has been recorded by Polish Radio during the festivals in Kazimierz and at her home in Bandysie. Marianna Bączek sings and speak with the beautiful Kurpie accent and she is always dressed in traditional Kurpie costumes. Her whole attitude brings out the best of what the traditional culture has to offer – an inter-generational message of genuine content and authentic performance practice.

In 2014, Marianna Bączek was honoured with the Knight’s Cross of the Order of Polonia Restituta in recognition of her outstanding achievements in performing and promoting Polish folklore. She has also received several other honours: For Merit to Culture in 1992, Origins of Music Award in 2013 and Pro Mazovia Award in 2014. Additionally, she has been a multiple prize-winner of the Festiwal Kapel i Śpiewaków Ludowych (Festival of Folk Bands and Singers) in Kazimierz Dolny (a.k.a. Kazimierz nad Wisłą or simply Kazimierz), between 1986 and 2015. In 2010, she won the ‘Baszta’ (‘Castle Tower’) – the main prize of the festival. 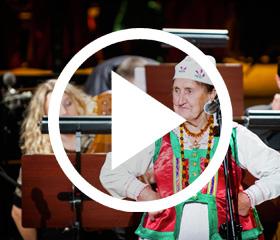