Jan Kmita's Ensemble from Przystałowice Małe is one of the best and longest-existing in the region of Radom. Born in 1936, Jan Kmita is an excellent violinist, who has been a pillar of a range of bands with the traditional Kajocki line-up for decades. Together with the area's best drummers, bassists, and accordionists, he had been running successful wedding bands for many years.

Mr Kmita is a self-taught musician: he did not learn to play the violin from oder or more experienced musicians as part of a popular apprenticeship scheme whereby the student would pay the master for the lessons in money, things, or labour at the master's farm (odrobek). Yet, since his early childhood, he'd had many opportunities to listen to the best fiddlers in his village and its vicinity play and treat their instruments, as well as to draw inspiration from their music. He highly values the old Gaca brothers ensemble, made up of Piotr the violinist (from Rdzów), Władysław the Polish accordion player, and Jan the drummer (who later rose to fame as violinist from  Przystałowice Małe).

As a little boy, Kmita would play on a used violin received from his cousin and neighbour, a few years his senior, Tadeusz Jedynak, made by the latter's father. At the age of 12, Jan played at a wedding for the first time. Over the next few years, he would very often perform as a soloist or as part of different bands. He has always been a very hard-working violinist, who would accept many commissions, as the fees he would be paid for his wedding performances were significant as compared to the income of his family farm.

As a 17-year-old, he played in a ensemble with the accordion player Han Michalski from Klwów, then with Florian and Józef Porczek from Nieznamierowice; Mieczysław Gwiazda from Ligęzów; Walenty and Mieczysław Kędzierski from Rdzuchów; Stanisław Rojek from Przysucha; Stanisław Przybyszewski from Skrzyńsk; Sławomir Lesiak and Tadeusz Lipiec from Wygnanów.

He took a long break from playing the violin after a building accident in which he hurt his palm. He made a comeback only after 20 years and some vigorous encouragement from the Gołcunecki singing ensemble from the village of Gałki, who persuaded him to join the instrumental group accompanying them during folklore events. He no longer works as a wedding musician as the demand for this kind of music has dried out. However, he remains a good Kajocki violinist who is a able to render traditional local motifs with clarity and energy. His repertoire includes countless mazurka melodies called "continuous" obereks which he plays is a manner characteristic for the Kajocki micro-region. He shares his talent, rich repertoire, and traditional performance technique with young people interested in the music of the countryside. As well as leading workshops in Warsaw, Lublin, Kraków, and Toruń, he often welcomes students to his home in Przystałowice. Among the many whom he taught are: Ewa Grochowska, Mateusz Niwiński, Krystian Pisowicz, Janusz Prusinowski, Katarzyna Zedel, and Marcin Żurek. Accompanying the master as members of his ensemble are more and more often his young students Krystian Pisowicz, Agnieszka Niwińska, and Joanna Strelnik, to name just a few.

Performances of the Jan Kmita Ensemble have been recorded by Polish Radio, Andrzej Bieńkowski, and Mr Kmita's own students. There also exist recordings of the ensemble's many appearances alongside Gołcunecki (e.g. at the Traditional Dance Folk Dance Competition in Rzeszów, Polish National Convention of Country Theatres in Tarnogród, or festivities held at the Open-air Museum of Rural Architecture in Radom) and at the many national and regional competitions they took part in (e.g. in Maciejowice, Przysucha, and Kazimierz).

In Maciejowice, the ensemble won Złote basy in 2010, 2012, and 2015. They also recorded many successes during the Kolberg Days in Przysucha as well as the National Folk Bands and Singers Festival in Kazimierz, where they won the first prize together with Tadeusz Lipiec in 2015. 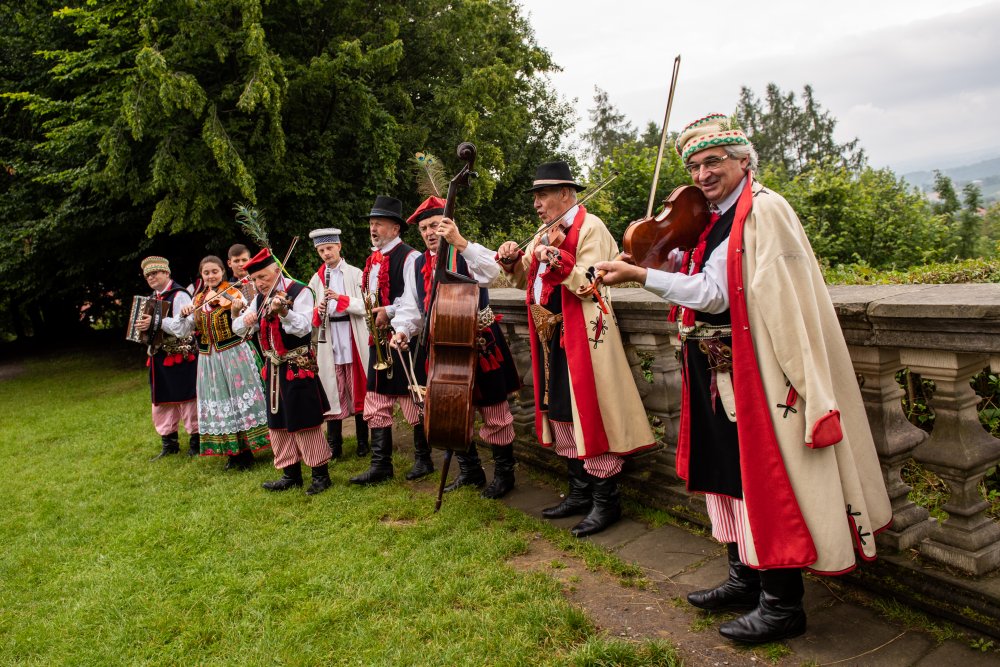