“Dziedzictwo Nasze” Foundation was established in 2004 by a group of activists, who shared a common need for intensified action in the field of protection of the intangible and tangible cultural heritage of the northeast Masurian region. Since the beginning of its existence, the aim of the Foundation has been to systematically implement projects aimed at complementing and supporting various areas of activity of the cultural institutions in the Masurian region, such as the Folk Culture Museum in Węgorzewo.

In the last seventeen years of its existence, the Foundation has shown through its activities four main “faces”, reminiscent of the four faces of the Old Slavic deity Światowid (Swetowyd).

The first “face” of the Foundation is the protection of intangible cultural heritage, with a special focus on traditional folk arts and crafts. In this area, the Foundation has carried out a number of projects, either on its own or in partnership with other cultural institutions and/or the local government. These projects introduced a number of innovations of key importance for the overall cultural development of the Masurian region. The most important among them are: establishment of the network of handicraft workshops providing young people with access to practical training in disappearing professions (this programme was implemented in 2005 in cooperation with the Wydminy Commune); establishment of the network of old crafts and skills workshops in the Warmian-Masurian Voivodeship (2006); The Disappearing Profession – Painting on Glass – an educational project for primary school pupils and childrenʼs homes from the Olsztyn province; Dąbrówka Nowa - Village on the Węgorapa River – an art workshops for children, inspired by the artistic legacy of Aleksander Słomiński, a sculptor from Dąbrówka Nowa; St James Mediaeval Fair (organised jointly with the Museum in Kętrzyn) – demonstrations and workshops in forgotten crafts (2007); Vilnius Folklore Atelier in Węgorzewo – dulcimer workshops and workshops on Vilnius songs; Regional Parliament of Regionalists in Olsztyn (the Foundation was responsible for co-organisation of the disappearing professions demonstrations) – workshop demonstration and presentation of the achievements of regional handicraft workshops; The Folk Festival in Giżycko – workshop demonstration of disappearing professions; Ełk Days – demonstrations of traditional professions; St Jamesʼ Medieval Fair – (co-organised with the Museum in Kętrzyn) – demonstrations of and workshops in forgotten crafts (2008); inventory of Folk Art Collection in Piecki (2008); Tradition Workshop – Creation of Cultural Tourism Product – Kętrzyn, realised in cooperation with the Museum in Kętrzyn (2009); publication of the collection of archaic folk songs of the settlers from the Vilnius region entitled Śpiewna nasza mowa (The Singing Language of Ours); Cultural Traditions as a Form of Promotion of the Regions – the Forum for the Exchange of Experience in Kętrzyn (realised in partnership with the Museum in Kętrzyn); A conference entitled The Ratification of the 2003 UNESCO Convention on Safeguarding the Intangible Cultural Heritage as an Opportunity for the Regional Development (co-organised with the Office of the Marshal of the Warmian-Masurian Voivodeship in Olsztyn in 2010); active participation of the Foundationʼs representatives in the Public Debate Forum entitled Polandʼs Cultural Wealth – Identifying the Intangible Heritage organised in Presidential Palace (2011); intangible cultural heritage exhibition entitled Anna Bałdyga and Her Students (Wydminy); meeting with Cepeliada on Chmielna Street in Warsaw (co-organised with the Office of the Marshal of the Mazovian Voivodeship); workshops for the intangible cultural heritage experts organised in Warsaw and Lublin (2012); conference Intangible Heritage – Promoting Our Identity organised in Olsztyn in cooperation with the Ministry of Culture and National Heritage and the Office of the Marshal of the Warmian-Masurian Voivodeship (2013); European Heritage Days – biographical exhibition Wojciech Muchlado – The Legend of Olsztyn”; publication of an album/encyclopaedia Our Heritage – Part 1, dedicated to folk artists from Warmian-Masurian Voivodeship; The Way It Used to Be – demonstrations and workshops of old rural activities in Nowa Wieś Ełcka (Ełk District); Polish Harvest Ritual – Preparations – technical and artistic workshop in Bystry (Giżycko District) (2016); partnership in the project

The Vilnius Dulcimer Workshops: Reconstruction of the Cultural Tradition of the Vilnius Region in Northern Poland (2017); The Vilnius Dulcimer Workshops – co-organised with the Gminny Ośrodek Kultury (District Cultural Centre) in Straduny (2018); the project celebrating the 45th anniversary of the death of the folk sculptor Aleksander Słomiński, combined with the presentation of his work – co-organised with the artistʼs family, the Community Cultural Centre in Budry, the inhabitants of Dąbrówka Nowa (2019).

The second “face” of the Foundation is the activity dedicated to the preservation and protection of the tangible cultural heritage, including the treasure of Polish technical culture. In 2007, the Foundation established the unique Museum of Railway Tradition, with departments in two Polish provinces – Warmia-Mazury and Podlasie. The museum has a polytechnic profile and functions as a social museum sustained by the work of volunteers and the commitment of all those dedicated to preserving the memory of the development of technical thought). The efforts of the Foundation have resulted in securing the supervision of the heritage conservator over sixteen historical buildings of the Węgorzewo railway junction (these buildings have been entered in the Polish Register of Historic Monuments). In this context, a number of actions and projects were also carried out, including: elaboration of the concept of adaptation of selected sites and historical buildings for educational, cultural and tourist purposes; preparation of a preliminary inventory of historical village buildings in Giżycko and Węgorzewo districts and Srokowo commune; preparation and publication of the promotional publication presenting the North Masurian Lakeland as a place of rich history and tradition; preparation of an inventory of cultural landscape in Giżycko and Węgorzewski districts and Srokowo commune (activities carried out in cooperation with LGD-9 – Lokalna Grupa Działania/Local Action Group, i.e. Federation of Associations for the Development of Northern Community of Great Masurian Lakeland) (2009); preparation of the documentation of railway monuments (2007); participation in the project DOM – dziedzictwo wokół mnie (HOME – the Heritage Around Me) and co-creation of the portal Cultural Heritage of Warmia and Masuria (2014); celebration of the European Heritage Days by organising the exhibition entitled Discarded Heritage, which presents the surviving monuments of railway architecture located next to inactive or liquidated railway lines (2015); participation in the programme of revitalisation of the historical landmark Guja – Beyond Time and Divisions; II prize in the competition of the the General Conservator of Historical Monuments entitled Know Your Heritage – Open the Gates of the Future (2016); celebration of the European Heritage Days by organising the project 110. Anniversary of the Opening of the Węgorzewo-Kętrzyn Railway Line and 10 year of the Railway Tradition Museum in Węgorzewo (2017); Terra desolata – archaeological workshops for children organised jointly with Terra Desolata Association (2018); celebration of the European Heritage Days by organising the project Time – Man – Space presenting life stories of the workers of Węgorzewo railway junction and the ethos of railway service in independent Poland (2018). The Foundation also organised several photographic exhibitions dedicated to railways and their place in the cultural landscape of the Masurian region. 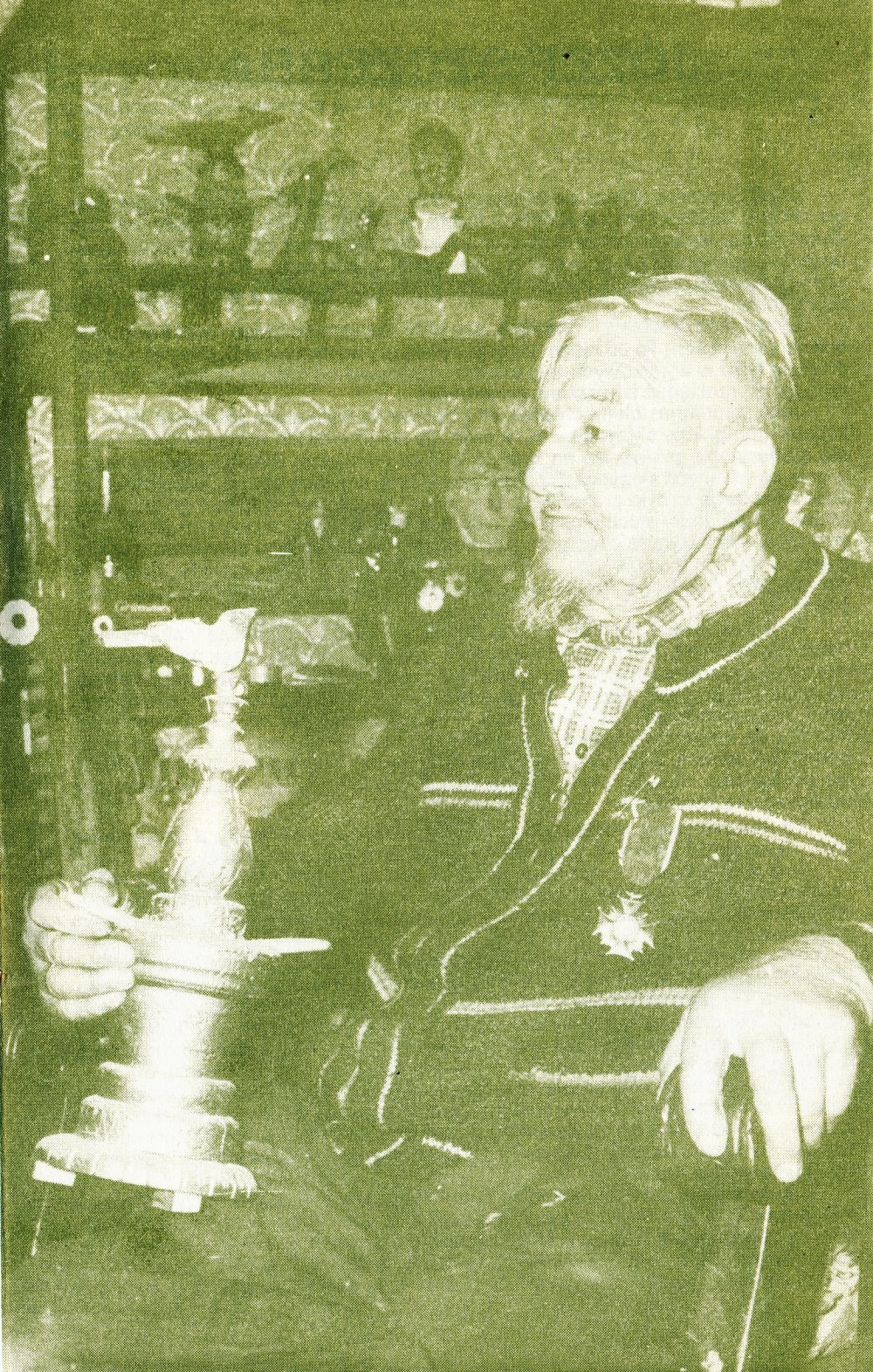