Field of activity:
a weaver from the Podlasie region, known for her decorative fabrics with traditional thematic design and woven using the technique of double-warping. She also regularly teaches workshops in the weaving workshop of the Podlasie Folk Handicrafts Route (Szl

Bernarda Rość is an artist, who belongs to a small group of active weavers working in the Janów centre. She weaves woollen decorative fabrics using hand looms and the unique double-warp technique.

Bernarda Rość was born in Szaciłówka, in the municipality of Korycin, where she runs a 25-hectare agricultural farm together with her children. She learnt to weave at the age of fifteen directly from her mother, Marianna Dzieszko – an outstanding artist who specialises in the double-warp technique of weaving decorative fabrics. At first, she wove throw rugs in the form of the so-called szmaciaki (rag runners), double-weave woollen pasiaki (striped fabric costume made of wool) and kilims. She sold her first double-warp throw rug, woven in 1975, to the Białystok-based “Cepelia” store, with which she co-operated until the early 1990s.

Her works exhibit a very high level of weaving technique and aesthetic value embedded in her unique way of colour and composition arrangements. Bernarda Rość specialises in narrative textile art. Over the years, she developed her own, recognisable style. In her work, the scenes of rural life, carefully elaborated and translated into the language of weaving, are most often combined with the motifs of trees and bouquets, which create a bordering pattern (bordure) characteristic of her works.

Bernarda Rość is an eager ambassador of the unique double-warp weaving technique. For years, she has been passing on her skills to the younger generation. In 2016, she participated in the “Master of Tradition” Programme operated by the Ministry of Culture and National Heritage, within which she was passing on the secrets of the double-warp carpet weaving to her daughter Agnieszka Iwanicka.

Since 2011, together with other weavers from Janów, she cooperates closely with Izumi Fujita, who disseminates Polish weaving techniques and Polish traditional handicrafts in Japan. Bernarda Rośćʼs works including large decorative fabrics as well as objects of everyday use, such as pillowcases, tablecloths or bags woven on looms, ornamented with traditional and narrative patterns, are very popular among the Japanese.

Bernarda Rość collaborates also with professional visual artists in weaving their designs in the double-warping technique. In 2020, within the framework of the exhibition entitled Działy otwarte. Działy zamknięte (Departments Open. Departments Closed) organised to celebrate the 60th anniversary of the Central Museum of Textiles in Łódź, Bernarda Rość wove two commemorative double-warped fabrics dedicated to Professor Eleonora Plutyńska and Krystyna Kondratiuk. These works were commissioned by the Central Museum of Textiles in Łódź and designed by Małgorzata Markiewicz, the curator of the anniversary exhibition.

Bernarda Rość is a scholarship holder of the Minister of Culture and National Heritage (she received the scholarship in 2014 and 2020). She is also a recipient of the scholarship of the Marshal of the Podlaskie Voivodeship (2018) and a winner of numerous textile competitions, including the Double-Warped Fabrics Competition in Janów, the National Unique Amateur Fabrics Exhibition organised by the Kujavian-Pomeranian Cultural Centre in Bydgoszcz.

Since 1994, Bernarda Rość welcomes tourists and connoisseurs of weaving in her atelier, which she makes available within the framework of the Podlasie Folk Handicrafts Route. She participates in renowned national and regional folk art fairs, including the Folk Art Fair in Kazimierz Dolny, the Jagiellonian Fair in Lublin and, until 2016, Folk Sculpture Fair of Two Warped Weaving and Smithery and the June Craft Fairs in Białystok. Her carpets, which have won numerous awards in folk art competitions, find their way into private collections in Poland and abroad. Since 1986 she has been an active member of the Association of Folk Artists in Lublin (Stowarzyszenie Twórców Ludowych). 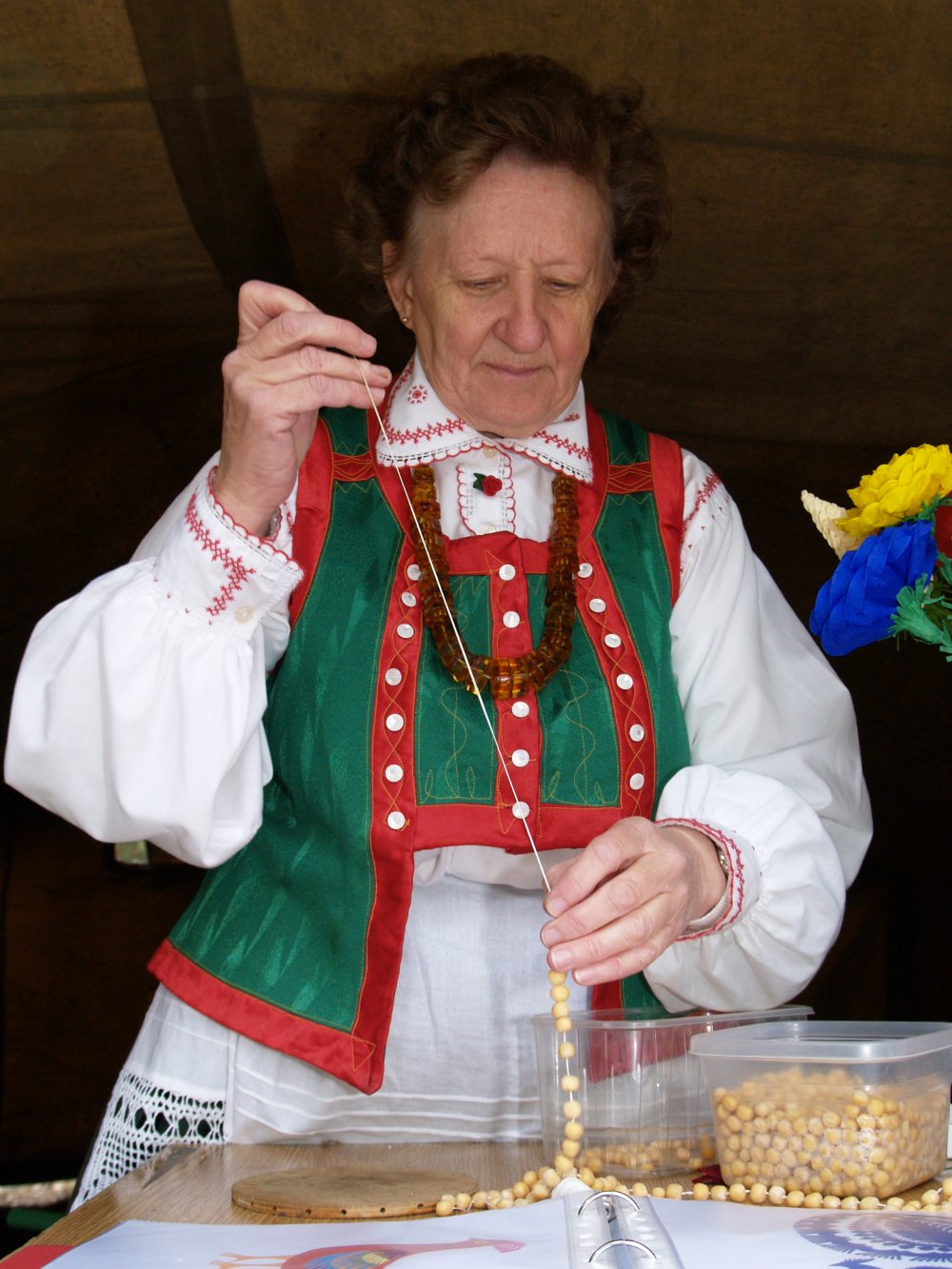