The ancestors of the members of the “Gościszowianie” ensemble came to Bosnia in the last decade of the nineteenth century after a long journey from the northern borderlands of Austria-Hungary. They got there at their own expense by carts, on foot and, if someone could afford it, also by train. To this day, the villagers vividly remember the places of origin of their families. The villages mentioned are: Trześń near Tarnobrzeg, Włodzimierz Wołyński, Grybów. In the area around Prnjavor, they formed a compact community by settling in villages not far from each other: Nowy and Stary Martyniec (Novi and Stari Martinac), Gumjera, Rakovac, Kunova.

At first, they lived in huts, cleared forests for cultivation and then built houses with bricks they made themselves. The Poles became known among the locals as skilled coopers and wheelwrights. They benefited from the fertility of the local soil. The Polish community was known for its religiosity and generally did not enter into family relationships with representatives of other nationalities, although there were exceptions. The Polish ethos was supported by the activities of the Polish school in exile and the activities of the nuns who came to Bosnia from Cracow. They told stories about the history of Poland, and the children dreamed of seeing Wawel Castle and bowing to kings.

Conditions at the end of World War II led to the decision to leave Bosnia (the threat of dismantled Ushtashe and Chetnik units, demilitarised soldiers and criminals driven by greed for loot and a desire for revenge for Polish partisan involvement). The Polish authorities, in cooperation with the post-war Yugoslavia government, agreed on the conditions for the resettlement of several thousand Poles in a relatively short period of several months – from spring to autumn 1946. The displaced Poles were allowed to take their movable goods and animals with them. They regretted the generous local nature with its multiple annual harvests, the mild climate and the almost fifty-year legacy they had left behind. The area of the Bolesławiec district in Lower Silesia was indicated to them as an area of compact settlement. At the end of June 1946, one of thirty-two transports, brought the inhabitants of todayʼs Gościszów to the railway station in Bolesławiec after a week-long journey. Upon their arrival, they found the farms still inhabited by Germans and the cold plaguing everyone. Almost all the inhabitants of Nowy Martyniec settled in Gościszów. Their deep connections

helped them preserve their community and quickly adapt to the new conditions and start building a new reality.

In the early 1980s, the residents formed a singing group, fuelled by their motivation to make their own music and sing the songs they remembered from Galician times, as well as those they had learned from their Serbian neighbours in Nowy Martyniec. They remembered several melodious songs in Serbo-Croatian, but they were particularly fond of the Balkan dance kolo (wheel) still danced on festive occasions.

Aleksandra Łaniocha – later winner in the category of solo singing at the Kazimierz Festival – was born in Nowy Martyniec in 1944, on the day of the funeral of her father, who had been murdered in a bandit raid. Her widowed mother went out every day with her children to work in the fields. To give rhythm to the work they did together, she hummed songs. This is one of the sources of the unique repertoire not only of Aleksandra but also of the whole ensemble led by her.

To be able to attend the festival Kazimierz or prepare a presentation for one of the regional folk competitions the members of “Gościszowianie” Ensemble had to regularly meet and rehearse the repertoire. They also created “theatres” and in the 1980s, staged a play called Strachy (Scarecrows), which told the story of ghosts haunting Gościszów. The play was conceived one evening in November. The atmosphere was suitable to evoke vivid memories of encounters with unknown forces and the play that emerged was a patchwork of stories about ghosts and nightmares, about spirits haunting the local church told by members of the group. Another performance – Gody, Gody... (Wedding, Wedding...) – was awarded during the National Convention of Polish Village Theatres in Tarnogród. It illustrates Christmas Eve in Gościszów with the arrival of the local Herods. A walk with Herod is considered an honour in Gościszów. Every year, in the procession of Herods around the city, the theatre of scarecrows visits every house. Only the successive generations of carollers change over time. In the 1980s, Kolędziarze (Carollers) created by “Gościszowianie” won the prize of Prof. Józef Burszta in the Kazimierz Festival competition.

Michalina Ładocha became famous for her role in Strachy (Scarecrows) where she played a “strong” woman who chases away the men who feast too long. She was also awarded numerous prizes at the Kazimierz Festival as a soloist. “My younger son loved to sing at weddings, where I played the role of the starościna (wedding host). Singing at weddings was always an honour. Now my oldest grandson sings with me. Sometimes we will take a waggon out to the field and heʼll say to me, ʻWell, Grandma, let us sing!ʼ. Usually we sing Matulu moja… (Mother of Mine...), an old song from Galicia” – says Michalina Ładocha.

“Gościszowianie” Ensemble first participated in the National Festival of Folk Bands and Singers for the first time in 1987. They won the 1st prize in the category of singing groups, which drew everyoneʼs attention to the phenomenon of singing preserved in the circle of Polish remigrants from Bosnia. This relatively small ethnographic group, numbering about 18,000 in 1946, has preserved in emigration unique elements of the old repertoire they had brought with them from their places of origin in the nineteenth century. The traditions cultivated and preserved in the new place are regarded as relics of the Galician homeland abandoned over a century ago. The performance canon and conformity with the family heritage are still preserved and guarded. The Festival in Kazimierz has acquired a special significance in the commune of Gościszów. The formula of the festival competition as a prestigious place to present oneʼs heritage was appreciated. After 1987, members of Gościszów commune regularly won prizes in singing competitions for adults and young people. Everyone in the commune sang – men from Herod groups, women, young girls and children, and adults presented a spectacle. The successes reinforced the need to pass on traditions. The group from Gościszów proved to be the most active in this respect of all the groups active in the villages populated by Polish families from Bosnia. They sing wedding songs, love songs, orphan songs, recruit songs and religious songs, old ballads and old carols not heard anywhere else.

Iwona Omiatacz is the leader of the group. She is a “master of korowaj” (korowaj – a wedding bread/cake; equivalent to kołacz from the West Pomerania region of Poland). She passed on the making of korowaj to younger generations and reminded the elderly of this now often forgotten wedding bread. She also travelled with relatives to neighbouring villages and conducted the ministerial programme Master of Tradition. Her two daughters sing in “Gościszowianie” Ensemble, her sons help with the performances, as is the custom in other families of Gościszów. The village continues the tradition that the inhabitants intensively participate in strengthening the community. It builds on the experience of over a hundred years of emigration.

One of the most important achievements of “Gościszowianie” Ensemble was the participation in the International Festival Wratislavia Cantans at the National Music Forum in Wrocław in 2019. In a series of concerts Pieśni z lasów i pól (Songs from the Forests and Fields), the group performed works from its repertoire, including: Szesnastego lipca z rana wzeszło słonko krwawo (On the Sixteenth of July the Sun Rose Bloodily in the Morning) – a moving example of peasant patriotism, U jeziora zimna woda (Thereʼs Cold Water at the Lakeʼs Shore) – a womanʼs exhortation to fidelity, and Hej nam, hej! W polu na ugorze sam Pan Jezus orze (Hey, hey! In the Field on the Fallow Land the Lord Jesus Himself is Ploughing) – a rare example of a carol usually sung at harvest time. The ensemble is also widely known for its talent in traditional folk arts and crafts. Zofia Ludziak – a renowned master of making kraszankas (Easter eggs) and Maria Kida – a storyteller and author of paper tissue bouquets are permanent members of “Gościszowianie”. They regularly cooperate with Karkonosze Museum in Jelenia Góra. In 2015, the custom of Herodsʼ walking, straw spiders and other works of the members of “Gościszowianie” were presented within the framework of the exhibition Tradition in the Space of Time. The 70th Anniversary of the Great Migration held in Jelenia Góra and dedicated to the transmission of traditional culture and its importance in the process of shaping the Lower Silesian community after 1945.

Once a year, together with the Community Centre for Culture and Sport in Nowogrodziec, the ensemble organises the summer festival Pecenica. To commemorate the Bosnian emigration, pork and Balkan pita, a thin layer cake with apple, pumpkin and cheese filling, are prepared. This is served with rakija – a vodka made from grapes grown in home gardens. A unique delicacy is sweet and spicy cabbage-filled canned peppers. These are treasures of more than half a centuryʼs history of the Galicians presence in Bosnia. Korowaje and loaves of bread baked on a cabbage leaf are prepared for baking competitions. At regional competitions of Easter and Christmas traditions, żury (Polish sour rye soup), kutias (Polish Christmas cooked wheat pudding) and pierogi (dumplings) are served.

It is not nostalgia that determines and fuels the continuation of traditions in the Gościszów community, but their importance in strengthening social bonds and feeding the relational and creative tissue of the community. The Oskar Kolberg Prize was awarded to the “Gościszowianie” Ensemble in a special year with two anniversaries: the 75th anniversary of the arrival of Poles from the former Yugoslavia to Lower Silesia and the 40th anniversary of “Gościszowianie” Ensemble. 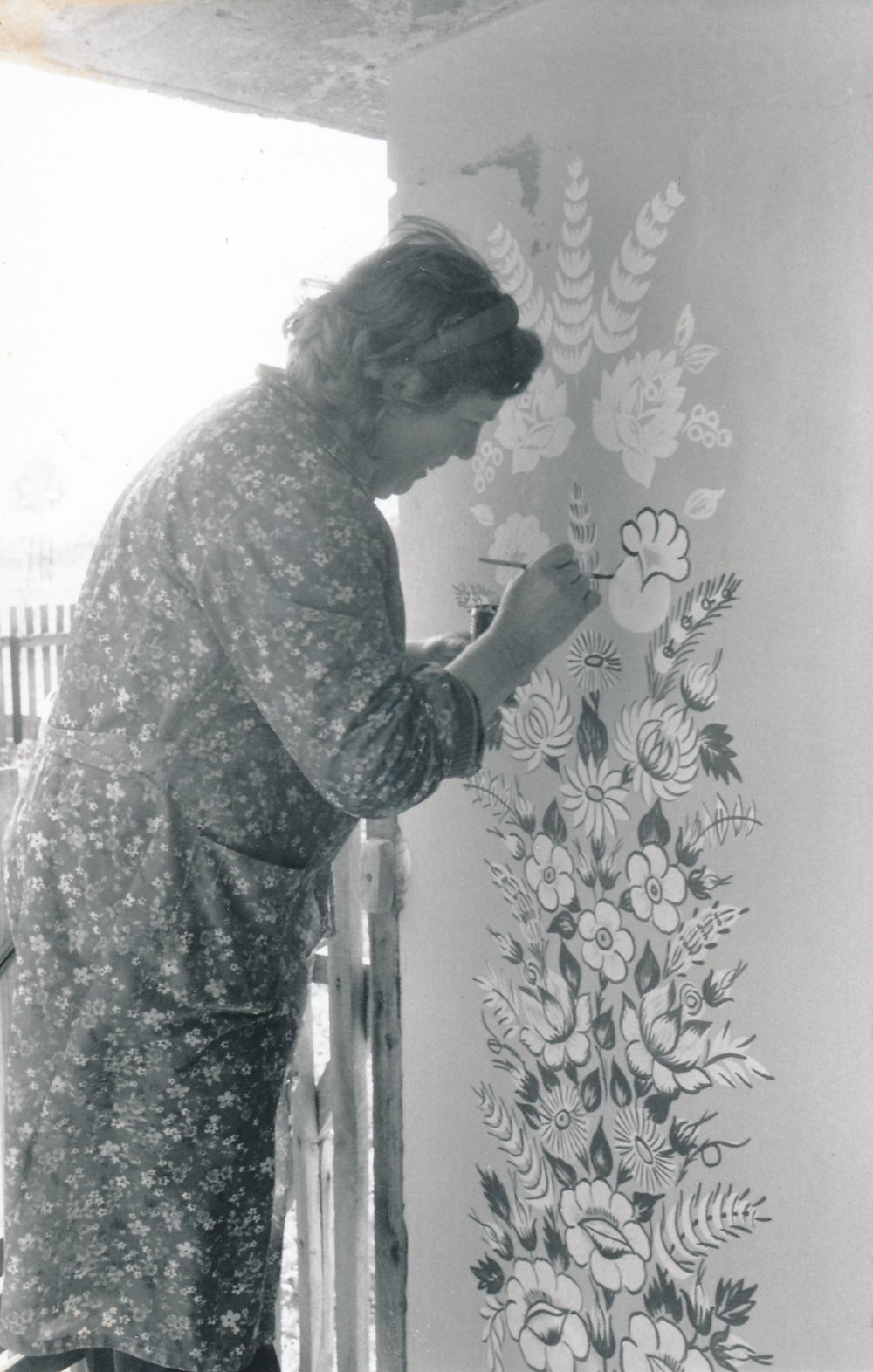