Field of activity:
Researcher of the Carpathian folk culture, ethnographer, folklorist, author of publications, museum expositions and exhibition concepts in open-air museums in southern Poland, lecturer at folkloristic seminars; she also acts as a consultant and animator o

Maria Brylak-Załuska was born in Lviv on 8 December 1943. After the war and subsequent wandering various places in Poland, her family settled in Lublin. Here, in 1968, Maria Brylak began studying at the Maria Skłodowska-Curie University in the Department of Ethnography and Ethnology, then headed by Professor Roman Reinfuss. A number of intensive field research projects were carried out in the Department and Majka (an abbreviation of the name Maria that Brylak uses to this day) was wholeheartedly engaged in them. This was the time, when the generation that remembered the nineteenth-century village life, culture, traditions and folklore were still alive. Under the supervision of Professor Reinfuss Maria Brylak focused her research on Łemkowszczyzna (the Lemko region).
She undertook research on
maziarstwo (an activity connected with the production and application of tar) in the village of Łosie (Gorlice county), which resulted in her MA Thesis and in the excellent publication she compiled later, which comprehensively presented the subject – Maziarska wieś Łosie (The Maziar Village of Łosie, Ossolineum Publishing House 1983). Her colleagues laughed that she was “stuck in the tar” but this was completely untrue. While still a student she analysed different aspects of the Polish traditional spiritual culture and published her findings in magazines and books including – Monografia powiatu myślenickiego [Monograph of the Myślenice District in: Kultura ludowa vol. 2 (Folk culture), Cracow 1970] and Nad rzeką Ropą. Zarys kultury ludowej [By the River Ropa. An Outline of Folk Culture, Cracow 1965]. Her professional career began in 1966 in the Museum of Folk Architecture in Sanok, where she became acquainted with open-air museums in theory and practice, for example – by coordinating the creation of a traditional Lemko hut from Komańcza. Professor R. Reinfuss in 1995, recalling at a scientific conference the creation of open-air museums, said: “Making a decent interior design of a house requires both vast knowledge and, above all, a special talent. This special talent was shown by M.Sc. Maria Załuska née Brylak, when she designed the interior of the Lemko hut from Komańcza. She excelled with deep insight and precision in exposing even the smallest details of the traditional Lemko interior. In Komańcza [Brylska-Załuska] provided a model of the perfectly reconstructed interior, and the examples of similar solutions could be admired also in Nowy Sącz [Skanseny po latach – założenia a realizacja (Skansens/Open-air Ethnographic Museums – Assumptions Versus Implementation), Nowy Sącz 1996). She became an outstanding expert in the field of skansenology as well as in the field of the interior design of traditional rural buildings, making a significant contribution to the development of the discipline. Between 1970 and 2005 worked at the Sądecki Ethnographic Park (a division of the District Museum in Nowy Sącz). At the time she started her career, the Sądecki Ethnographic Park was just a vast meadow, bordered on one side by a forest, with a lonely, wooden, one-storey highlander granary. At the time of her retirement, however, there were over seventy objects in the museum, most of them furnished, forming an integrated homestead, surrounded by greenery, documenting the life and unique climate of the former villages in the Nowy Sącz region. Maria Brylak-Załuska was a co-author of the skansen, and her concept of interior design and skansenʼs integrated homesteads of the “village-museum” type was completed there and became a model for other skansens created in the 1970s. Professor Jan Święch, from Jagiellonian University, a prominent expert in skansenology, stated at a conference in Nowogród in 2017 when presenting people who excel at open-air ethnographic museums: “As far as the interior design of open-air museums is concerned, I find the vision of Mrs Maria Brylak-Załuska – Majka very welcome; Mrs Brylak-Załuska, from whom we have learned the principles and design of interiors in our museums. The arrangements in Sądecki Ethnographic Park created by her impress with a subtly constructed aura “of the everyday mess”.

While working as a senior curator Majka Załuska became a great authority in the field of open-air museums and in the Nowy Sącz museum she was the head of the ethnographic department for many years, after which she served as the head of the exposition. The caretakers and members of construction team called her “skansenʼs housewife” because she ruled in the museum as a housewife who rules at home.

The construction of the open-air museum is only one element of Maria Brylak-Załuskaʼs activities. While working at the museum in Nowy Sącz, she wrote scenarios and acted as curator of numerous exhibitions, including abroad (in Slovakia and Russia), all in the field of folk culture of the Carpathians, especially the Sądecczyzna region. She showed extensive interests in the material culture of the Carpathian and Subcarpathian region with special attention to the ethnographic groups living in Sądecczyzna, the Lemk culture, the folk costumes of Lachs and highlanders and also of the neighbouring groups, and the social and spiritual culture in the former countryside. Throughout her career, she conducted field studies that enabled her to collect exhibits for the museum and document folk culture. The results of her field studies and archival analyses were published in numerous publications, mainly in ethnographic monographs or magazines dedicated to a specific area. Here are some of the titles: Strój Lachów Sądeckich (The Attire of Lachs from Sądecczyzna Region, co-authored with Zdzisław Szewczyk, Nowy Sącz 2004); Do cerkwi, do miasta, na tańce. Tradycyjny strój łemkowski – Rusińskich górali karpackich (To Eastern Orthodox Church, to Town and for Dances. The Traditional Attire of the Lemko – Hutsuls Carpathian Highlanders, Nowy Sącz 2002); O kulturze ludowej Lachów Sądeckich (On the Folk Culture of Lachs in Sądecczyzna, Nowy Sącz 2004); Dawna Sądecczyzna – Łemkowie (Old-Time Sądecczyzna – the Lemks, Nowy Sącz 2010); articles in editions: Kolory Nadpopradzia. Regionalizm w Piwnicznej (The Colours of Nadpopradzie. Regionalism in Piwniczna, Piwniczna-Zdrój 2011); Tańce i pieśni Pogórzan [Dances and Songs of Pogórzanie (Polish Uplanders), Bobowa 2014]; Podegrodzie i gmina Podegrodzie. Zarys dziejów (Podegrodzie and Podegrodzie Municipality. The History, Kraków 2014); Kultura ludowa Górali Sądeckich od Łącka, Kamienicy i Jazowska (Folk Culture of the Highlanders of Sądecczyzna ab Łąck, Kamienica and Jazowska, Kraków 2016;) Kultura ludowa Górali Nadpopradzkich (Folk Culture of the Highlanders of Nadpopradzie) (in preparation). She also published in regional journals – Rocznik Sądecki (Sądecki Yearbook), Alamanach Sądecki (Sądecki Almanac), Zeszyty Sądecko-Spiskie (Notebooks of Sadecczyzna and Spisz Regions), Sądecczanin (The Sądecczyzna Inhabitant), museum editions and open-air museum publications. In all her works, the reliability and exactitude towards sources are striking.

Majka Zauska collaborated with the Voivodship Culture Centre, later renamed to Małopolskie Culture Centre, SOKÓŁ. She completed a detailed map of ethnographic regions in Małopolska and is the main author of the project entitled Ethno-farmstead – an online information and educational platform dedicated to the folk culture of Małopolska (www.etnozagroda.pl). She is also the co-author (together with photographer Piotr Droździk) and scientific editor of an album of folk costumes Nastroje małopolskie (Małopolska Moods). She was recently involved in the completion of a ten-volume album Krakowiacy, Lachy, Górale. Stroje wsi małopolskiej (Cracovians, Lachs, Highlanders. Attires in the Villages of Małopolska), published in 2020, with her serving as the albumʼs scientific editor, advisor for some volumes, and author of some parts (Lachs from Sądecczyzna, Pogórzans, Lachs from Szczyrzyce, Higlanders from Sądecczyzna). This unique edition is the culmination of her activity as a folk costume researcher. Maria Załuska is the greatest authority in this field in southern Małopolska and one of the most renowned Polish experts in the field of folk costume.

Pedagogical activity, consulting, training and evaluation are the individual fields of Majka Załuskaʼs professional activity, as important as the other areas. She cooperated intensively with local cultural centres, regional associations, ensembles and farmer’s wives’ associations. For several decades she played the role of a consultant of regional amateur activities. Throughout her activity, she gave lectures and workshops on folk-cultural topics at a large number of seminars, conferences, student training courses, open-air guides training sessions as well as PTTK (Polish Non-Governmental Tourist Organization) guides training sessions or teachers. She granted interviews to radio and TV in programmes about folk traditions. For several decades, she served as a jury member in folkloric reviews and competitions in Małopolska, both in the municipalities and districts, as well as at the regional level.

A special role in her educational undertakings was played by Folkloric Study/College (founded by the Małopolskie Culture Centre, SOKÓŁ), which educates instructors of regional ensembles. She gave lectures (mainly on material culture and costumes) at all five editions of the Folkloric Study/College held so far. She also became a supervisor of scientific ethnographic camps organized for the Study participants. Maria Załuskaʼs contribution to the impact of the Folkloric Study has already marked a clear trace in the folkloric activities of the region and will continue to bear fruit for many years to come, promoting an unadulterated tradition of our fathers. 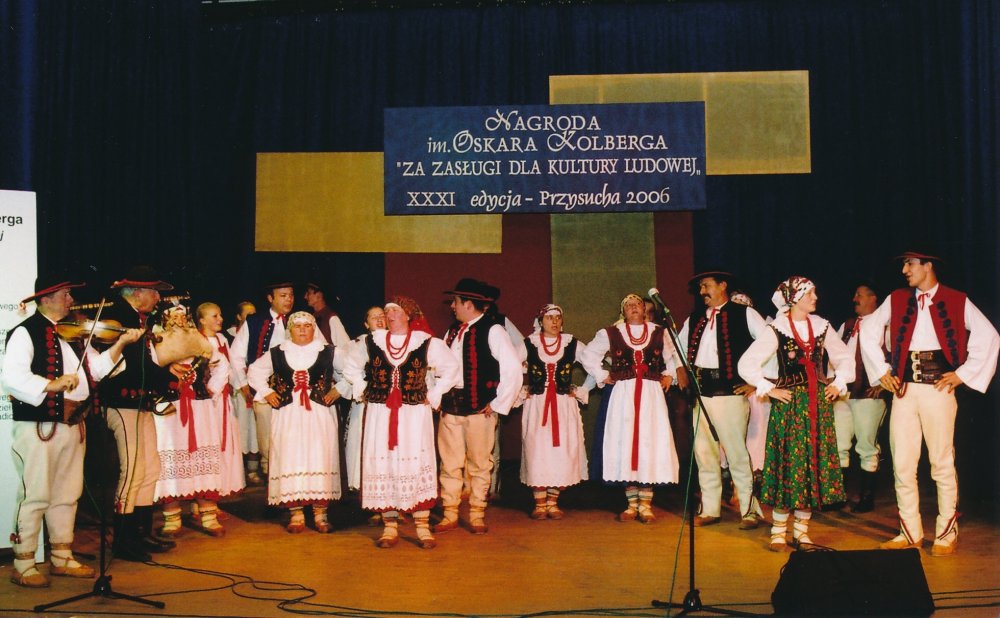