Czesława Lewandowska was born in 1953 in the village of Wejdo, commune of Łyse, in the heart of Puszcza Zielona (Green Forest) in Kurpie. She now lives in Ostrołęka.

Lewandowska is a remarkably talented and versatile person: she specialises in crochet lace making, but she is also involved in plastic arts – she creates tissue paper flowers, palms, spiders (the so-called kierce) and Christmas tree decorations. She was persuaded to take up handicrafts by her mother Władysława Krawczyk and grandmother Aleksandra Krawczyk, who passed on to her both technical skills and rules of design, age-old and specific to the region. She is now mostly renowned for her masterfully made laces. Her favourite designs include spiders, lilies, roses, roosters and stars. She must have already produced thousands of crochet insertions for Kurpie-style aprons, which are worn, for example, by the female members of the ensembles from Puszcza Zielona (Green Forest) and Puszcza Biała (White Forest), two constituent parts of the region of Kurpie. Lewandowska is especially fond and proud of the laces she made for the Kurpie-style folk costume worn by Ostrołęka-born Ewa Mielnicka, Miss Poland 2014.

For her tissue paper flowers, she draws direct inspiration from nature, for example her own neatly kept garden, where she grows a colourful array of different flower species. She uses those patterns for her palms and bouquets which are nowadays frequently commissioned to add beauty to decorations at wedding receptions.

Between 1970 and 1987, Czesława Lewandowska collaborated with the Spółdzielnia Rękodzieła Ludowego i Artystycznego (Folk Arts and Crafts Co-Operative) ‘Kurpianka’ from Kadzidło, for which she designed crochet laces used in aprons, tablecloths and napkins. She started her own lace business in 1977, initially making napkins for a co-operative from Pułtusk.

The artist has successfully presented her works at numerous competitions. In 1999, she won a prize in the adult category at a competition of plastic arts and literature called ‘Open your hearts for Jesus Christ as we enter the third millennium of Christianity’. Her winning crown with the image of Jesus Christ was auctioned for the benefit of the Wielka Orkiestra Świątecznej Pomocy (Great Orchestra of Christmas Charity), a popular charitable initiative. She is also very proud of the third prize that she won at the fourth edition of the Europejski Konkurs Sztuki Ludowej ‘Z nitki i z gliny’ (European Folk Art Competition ‘Made of Thread and Clay’), organised in 2009 by the Museum of Częstochowa and the prizes received at the competitions run by the Association of Folk Artists, Museum of Kurpie Culture in Ostrołęka.

She serves as chairman of Grupa ‘Radosna Twórczość’ (‘Cheerful Art’ Group), part of the Association ‘Unikat-przyjazna gmina’ from Ostrołęka, in which her enthusiasm rubbed on to a whole group of women who took up a range of different handicrafts. Today, they proudly present their works at local fests. Since 2011, she has been taking part in the immensely popular Christmas Fairs held at the National Museum of Ethnography in Warsaw. She has presented her works at folk art fairs in Kazimierz Dolny nad Wisłą and at Jarmarki Jagiellońskie (Jagiellonian Fairs) in Lublin, where, in 2018, she conducted workshops at the Summer School of Lace-Making. She is eager to share her skills at workshops held in schools and libraries. She also works with senior citizens taking part in classes at the University of the Third Age. Since 1997, she has been a member of the Association of Folk Artists, where she once served as secretary of its General Board.

Czesława Lewandowska’s efforts and accomplishments were first acknowledged many years ago and ever since then she has received a plethora of honours and awards, such as the Bronze Cross of Merit and the Medal For Merit to Polish Culture. In 2008, she was given the ‘Kurpik’, an award from president of the Kurpie Society for her contribution to protection of cultural legacy, inspiration to seek one’s own identity and comprehensive development of the region of Kurpie. In 2018, she received the Marshal of Mazowieckie Voivodeship Award for her merits in promoting the province of Mazowsze/Masovia – the Pro Masovia medal. In the same year, she was awarded the Bronze Medal For Merit to Culture - Gloria Artis. Czesława Lewandowska is very popular with the inhabitants of the city of Ostrołęka; in the ‘classy grandma’ poll she has come in second. One of the most highly-valued types of distinction she has received was the medal commemorating the 50th anniversary of the competition for the best Easter palm awarded to the most active participants in its history. The artist has also been given numerous awards and scholarships from local governments.

Czesława Lewandowska likes to collect things, too. She collects ballpoint pens (she has more than 3000 in her collection) and miniature alcohol bottles, which she brings from her journeys. She is a very energetic, cheerful and easy-going person. Her family successfully connected traditions of both parts of Kurpie. Her husband Jerzy (1948-2010) came from the White Forest. He was a devoted and dedicated partner of hers; she called him a ‘semi-artist’, as he always accompanied and supported her at the fairs and other events that she attended. She has two children. He grandson has inherited her temperament, interest in handicrafts and general curiosity. 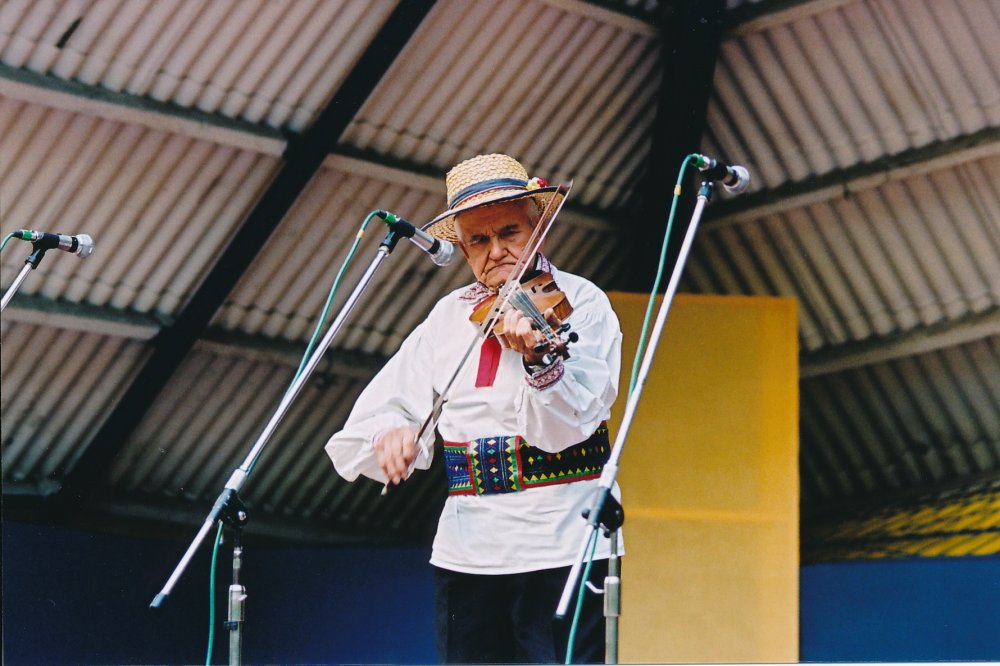