Mroczki Małe is a small village located on the administrative border between the voivodeships of Łódzkie and Wielkopolskie. Before the Second World War, the village belonged to an aristocratic family, whose servants lived on the premises of the manor, in what was locally known as kosiary (the plural form of the buildings they resided in). After the war, the land was taken over by the communist authorities and parcelled out amongst the former manor servants so that they could build their own houses. However, it was not until the 1960s that the village inhabitants eventually left the kosiary. Jadwiga Tomczyk and Janina Lipińska were amongst those inhabitants; they were born and raised on the premises of the former manor. The two girls spent a lot of time together; when they were grazing geese and, later, cows, they whiled away their time singing. Whenever there were family celebrations, they were obliged to sing on account of their beautiful voices and what the locals called their melodia (literally melody and in this context – musicality). Their common grandmother was a locally renowned wedding singer and she passed on to them a plethora of old and interesting songs. She would take the girls to numerous meetings with her neighbours, where a group of women met to spin wool, strip feathers and do some other useful activities, all the while singing songs to make the time pass more pleasantly. In later years, the girls also performed songs by the beds of the recently deceased and, in May, they sang the so-called May songs beside the roadside chapels. The kosiary were also inhabited by Jadwiga’s mother’s brother Stanisław Szafirowicz, an accordionist and his wife Maria, who came from the locally renowned family of musicians from nearby Golków. Maria inherited love for singing and she knew a rich repertoire of ancient songs and tunes. Every week, they held the so-called pograjki (the local type of music entertainment), during which they were accompanied by Stanisław Szafirowicz on his accordion. When on one occasion Szafirowicz could not attend the performance, the women asked Józef Tomczyk from nearby Mroczki Duże to come over and support them. It was the beginning of their close collaboration and, later, his marriage with Jadwiga, after which he relocated to Mroczki Małe. Several years later, when all the members of the singing group had their own households, they gathered for family celebrations. While the women sang, their husbands played instruments in concert. Such an ensemble performed at dance parties, weddings and harvest festivals.

At the district/communal harvest festival in Błaszki in 1993, the musicians performed with their wives and two female neighbours. They had prepared a very interesting programme, for which the whole ensemble had rehearsed under the roof of the Tomczyks’ house. The occasion proved to be a huge success (they were awarded the First Prize amongst the 16 so-called ‘harvest wreath’ ensembles) and prompted them to form a regular vocal setup. Its directorship was assigned to Józef Tomczyk.

In 2000, the Zespół Śpiewaczy z Mroczek Małych/Vocal Ensemble from Mroczki Małe made their debut at the famed and prestigious National Festival of Folk Bands and Singers (Ogólnopolski Festiwal Kapel i Śpiewaków Ludowych) held in the historic town of Kazimierz Dolny on the banks of the River Wisła (Vistula). The performance was very satisfactory – they received an honourable mention, and their subsequent appearances were even more successful: they were awarded either first or second prizes (Second Prize in 2005, First Prize in 2009, another First Prize in 2013 and Second Prize in 2017).

For fifteen years, the group comprised five female members until one of them left due to ill health. Apart from the three singers belonging to one family, the ensemble has also featured the Tomczyks’ neighbour and close friend, Zofia Michałowicz. Because she lives near a windmill, she is affectionately called a miller by the other members. Zofia’s grandmother was a village wedding singer, who passed on the profound need to sing to her granddaughter.

At local events, the ensemble performs with a band of instrumentalists, the singers’ husbands. When all of them perform together, they advertise themselves as the Dukat Ensemble (dukat is simply ‘ducat’ in English). The relationship amongst the members of the group is so tight that they always travel to their performances together, regardless of whether they appear in concert or individually. They all travelled to Kazimierz Dolny nad Wisłą, even though only the women performed at the festival. Their rehearsals are traditionally held at the Tomczyks’; the atmosphere there is always cosy, familial and friendly. They use these occasions for social purposes as well, just to spend the time in each other’s company. In May each year, the women and Jadwiga’s granddaughters meet to cultivate the rural Polish tradition of singing beside a roadside chapel; they treat this as a kind of obligation and take it very seriously. One of the granddaughters, Julia Grzelaczyk, is especially enthusiastic about performing the music of her grandparents. Last year, she joined their ensemble and has already appeared in public.

The repertoire of the Vocal Ensemble includes a wide range of songs: wedding songs, funeral songs, pastorales, love songs, soldier songs, good manners songs, ballads, Marian songs etc. The women speak the genuine dialect and that is also how they sing their songs. The ensemble’s recipe for success is authenticity, natural singing and beautiful, strong voices.

Since 2006, the ensemble has been directed by Jadwiga Tomczyk. The Zespół z Mroczek Małych stands out from the other folk groups in Łódzkie Voivodeship; it employs traditional singing techniques and has its own unique repertoire, passed down from generation to generation. 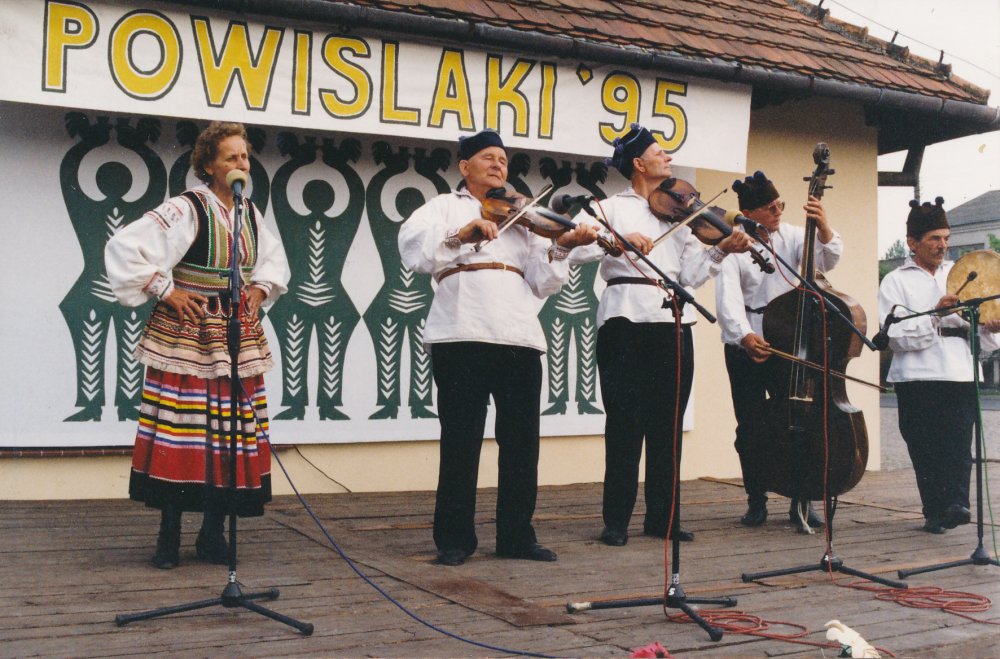