Halina Witkowska is a versatile and talented creator form Kurpie and a very active champion of folk culture from that region. She was born in the village of Sadykierz, Gmina Obryte in 1952. She got married in 1975 and subsequently settled in the village of Lemany, Gmina Pniewy – right in the centre of Kurpie’s White Wilderness (Puszcza Biała). Since she was a child, she has been surrounded by artistically talented people, who plied their trade making characteristic Kurpie ritual and decorative objects, embroideries and laces. In her parents’ home, together with her sisters, she made her first embroideries under the guidance of her mother, who worked for a female handicraft makers cooperative, established in 1936 by Wanda Modzelewska in Pułtusk, reactivated after the Second World War and later restructured as the Kurpie Art Works Cooperative (Spółdzielnia Twórczość Kurpiowska), a subsidiary of Cepelia. Witkowska was initiated into the Kurpie-style embroidery studying the least complicated motifs and leaving the more difficult ones for her mother, as they called for more experience, patience and specific talents. Nowadays, she is a seasoned artist with considerable expertise in the traditional Kurpie embroidery techniques and patterns. Despite the unavailability of homespun linen fabrics replaced by factory-manufactured canvases, which are woven more densely, she still weaves on a white fabric with satin-like threads or a red and black mouliné, making ornaments – that she familiarised herself with as a child – of the full, ‘quilted’ (zaścielany)embroidery consisting of such elements as krzyżóweczkas(a kind of chequered or ‘crossword’ pattern), ‘muffins’, herbal patterns, saws, chains, circles, semi-circles and stebnówkas(a type of stitch).

The artist has also developed her skills under the influence of her mother-in-law Kazimiera Witkowska (considered one of the best Kurpie-based maker of Easter eggs, hollowed egg shells decorated with glued-on bulrush and coloured wool) and her neighbour from Lemany, Krystyna Fabisiak, a distinguished White Wilderness region folk artist.

Halina Witkowska has been engaged in folk art for more than forty years. She specialises in Easter eggs, Christmas decorations, cutouts, Easter palms, paper flowers and crowns decorating the frames of paintings. She makes presentations of flax and wool tooling, and shows how to employ a variety of weaving techniques. She also draws on the rich culinary heritage of the White Wilderness area, e.g. the local ritual breads called fafernuchty. All her outstanding artistic creations display attention to detail and originality of composition based on traditional patterns. The artist enjoyed many years of collaboration with Cepelia. She still cooperates with a variety of cultural institutions and museums, which promote folk arts and crafts. She is also a frequent guest at ethnographic workshops and folk art fairs organised by the National Ethnographic Museum (Państwowe Muzeum Etnograficzne) in Warsaw, the museums in Sierpc, Ciechanowiec, Pułtusk, Ostrołęka, Ciechanów and Szreniawa, and the Association ‘Polish Community’ (Stowarzyszenie ‘Wspólnota Polska’). She has been a member of the Association of Folk Artists (Stowarzyszenie Twórców Ludowych) since 2002, and she has taken part in educational projects at the Folk Art Academy (Akademia Sztuki Ludowej) and the summer school of embroidery held at the Jagiellonian Fair (Jarmark Jagielloński) in Lublin. She has served as president of the Association ‘White Wilderness – My Local Homeland’ (Stowarzyszenia ‘Puszcza Biała – Moja Mała Ojczyzna’) since 2005. She has been the driving force behind the creation of a local art centre called the Kurpie Forge (Kuźnia Kurpiowska) on the premises of a former school in Pniewy. The place has become a meeting point for the whole host of folk artists conducting ethnographic workshops of the obsolete crafts and handicrafts (weaving, blacksmithing, pottery). It also gathers enthusiasts of the cultivation of folk art, former rituals and customs, folk costumes and traditional dishes of the regional Kurpie cuisine. Furthermore, the Kurpie Forge operates as a regional tourist information centre providing free promotional materials from the neighbouring communes of Zatory, Pułtusk and Wyszków.

Halina Witkowska’s long-lasting artistic-promotional efforts have been noticed and acknowledged by local and regional communities awarding her significant prizes. In 2013, she was given the prize of the Union of Kurpie (Związek Kurpiów), ‘Kurpik’, for ‘awakening identity’. She has won numerous artistic (for her Easter eggs and other decorations) and cooking (she has been noted for her culinary talents) contests. In 2011, she was awarded the ‘Pearl’ distinction from the Polish Chamber of Regional and Local Products (Polska Izba Produktu Regionalnego i Lokalnego). On a number of occasions, she has also been chosen as an honorary representative of the White Wilderness to promote the region of Kurpie in national cultural events, radio broadcasts, TV programmes, as well as folkloristic fairs and festivals in Kazimierz, Kraków and Warsaw. 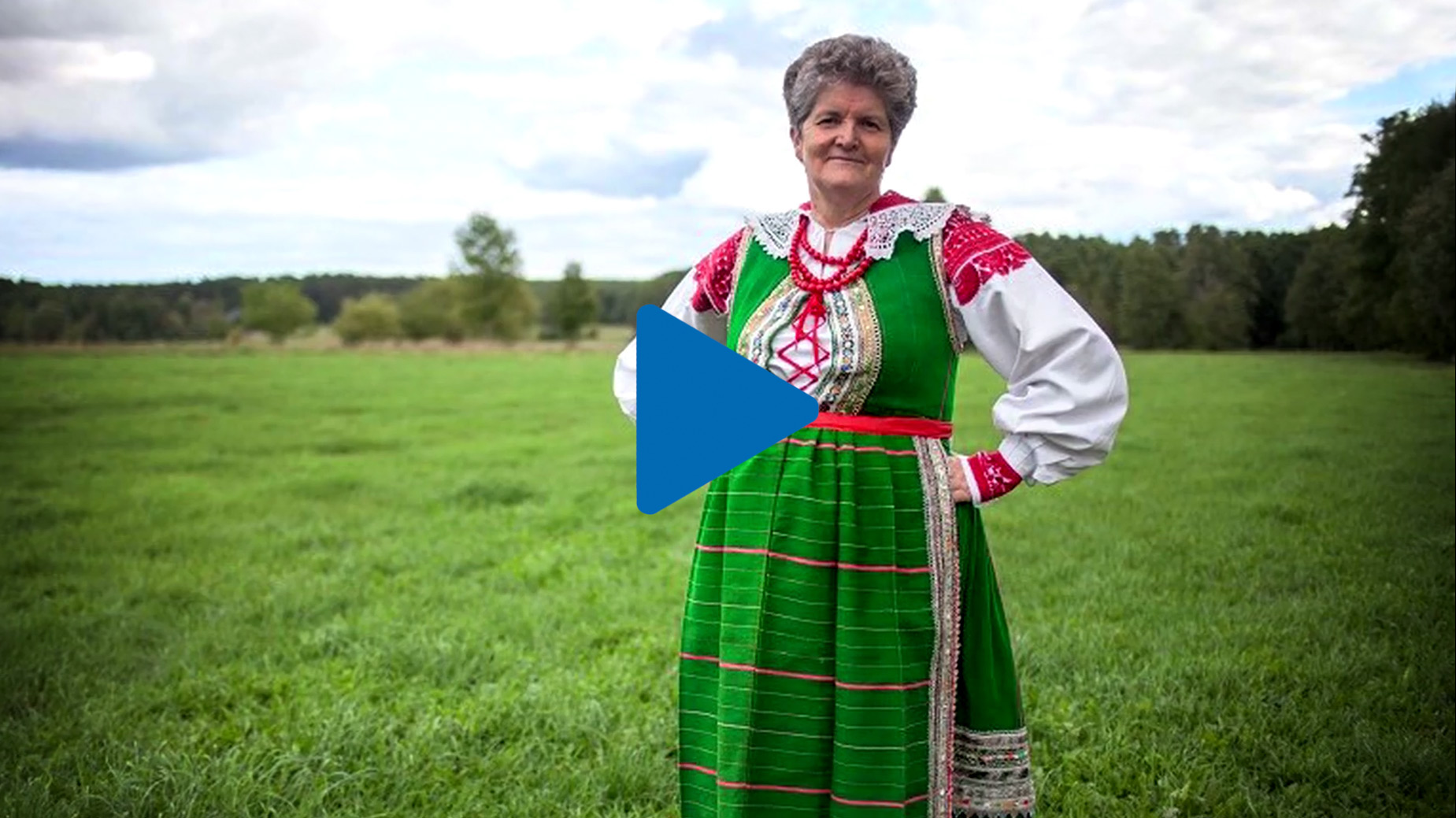 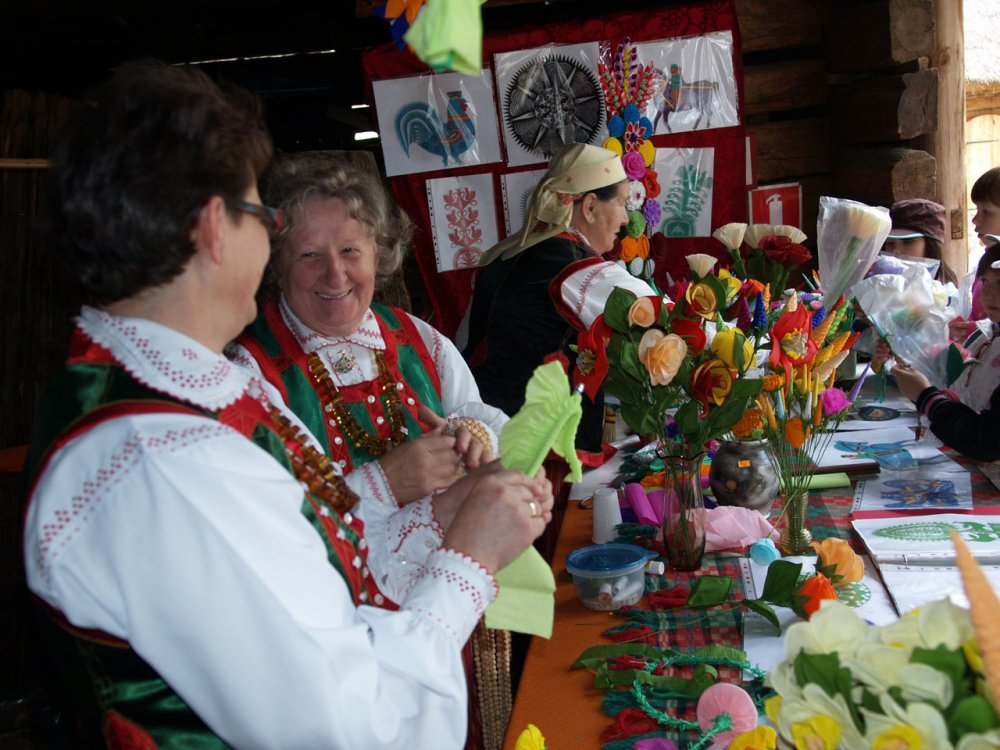